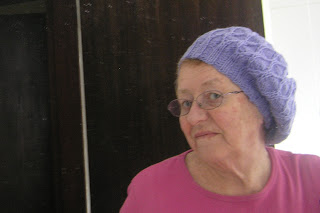 Here's Breiwick from Gudrun, the Shetland trader, who also has a page of designs on Ravelry. This beret is done in Heorloom Merino Magic, an 8 ply. The wool gives good stitch definition. It was also pleasant to use. The beret was not a difficult knit, it just required me to pay attention to what I was doing. This is the second article I've done this winter with a similar shift of stitches for effect. This one used a simple two stitch reversal of stitches to move the pattern over a stitch. The other was Rose's wristwarmers where there was a definite cable over several stitches. I preferred this method because the needles used for the wristwarmers was small than usually called for for the weight if the wool. This made the fabric fairly tight to manoeuvre. Gudrun warns in the pattern to keep a crochet hook handy as the loose stitch being reversed in order may slip. I had absolutely no problem with this at all. This picture is probably the more accurate portrayal of the colour which is a fairly definite mauve, not a wish-washy colour and nothing like blue at all. 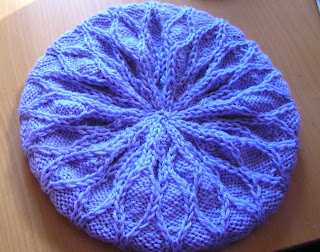 Here's the beret in the flat. I really like the way it all works in to the centre to end. I'll be making this one again. One good reason for making another is that this one is intended as a gift for a friend in cold city on the South Island of New Zealand. Think early through to late frosts and snow as well. I probably shouldn't have tried it on as i discovered I like it on me. However, I wanted a model for a photo. She's had longish hair for quite a while and has just had it cut fairly short so it appears fairly grey all at one time. Her comment was that her ears were freezing in the wind, and that she would like another hat to wear as a change from her merino/possum mix hat. 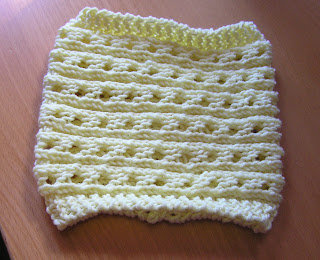 The neckwarmer/cowl is for the same friend. She cycles regularly. I thought a cowl would probably be easier to manage on a bike without possible loose, flappy ends getting in her face. This lemony yellow cowl is about 2/3 of a ball of Zara liberated from the linga beret shown a couple of posts below. I made myself one in the same pattern last year from some alpaca and thought the soft squishy Zara would work well with it. I haven't given it a credit as I don't know whose pattern it is. I just had a look at what I'd done before. It's not exactly difficult.

Beautiful weather here yesterday and today. 28° was forecast for yesterday in Sydney, ridiculously warm for the time of the year. Up here is always a good deal cooler than in Sydney itself. Our weather station thermometer showed about 20° as the maximum. I did sit outside and knit for a while till the sun moved and the breeze made the shade quite chilly. Today is still col and breezy but quite pleasant.
Posted by Jan at 3:10 pm

that is a beautiful beret, and it does suit you so you will definately have to make another for yourself! thanks for letting me know about your experience with 'beauty and the bees'soap - i am ready to take the plunge!

finally catching up with you!

You've really taken to her patterns haven't you! I can see why. It's such a pretty hat. Suits you so well. And I too think a cowl would work best on a bike. Good thinking!

Love the beret, will have to put this on the "to do" list

Looks gorgeous, as does the shawl - you HAVE been busy - and such gorgeous objects to show for it!

Thanks again for the wrap-up of your textured knitting.

I love the beret and I love the look of hats but I think I'd feel self-conscious actually wearing one!