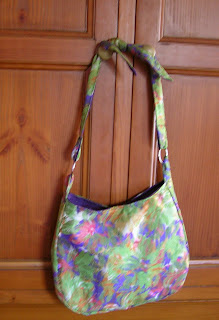 Yes, this is a knitting blog and yes, I have been knitting but nothing is worthy of a photo yet. I've done one ball of a lacy two ball scarf with a very simple pattern. I've been working on my pi shawl and can finally see the end in a couple of days. I'm about halfway round the edging garter stitch rows. Useless to take a picture yet. It's all bunched up on a large circular.

Today was horrible as probably most people in at least NSW know. I haven't been outside at all except for a couple of minutes on the balcony to take some photos. These can be see on Flickr here. Just amazing colours which gave me quite a shock when I first opened my eyes just after 5:00 am.

So I turned to sewing. Now I've sewn for years but not much over the last few. However, I wanted to make some skirts for my young granddaughters and had already cut out a bag. I found the green/purple material as a big piece in Anglicare in Hornsby. It was $7 and there is a lot left. The colours appealed to me and I immediately thought of a bag. It's lined with what seemed to be an almost new purple pillowslip, a really big one with binding and borders. That cost $1.50. Iron-on interfacing was needed and I used some on both the lining and outside of the bag as it's fairly soft fabric. Throw in a magnetic catch and a couple of rings and about an hour, I think, of sewing. It's been a while since I did anything like this so had to stop and think. I almost sewed it together without putting pockets inside and the catch on the lining. 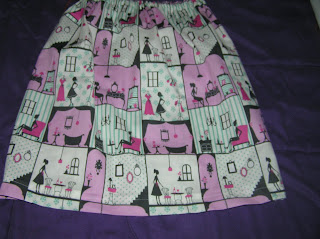 All these lovely fabrics come from Corrie at Retromummy. It was very hard to make a choice and she's had even more material arrive in her shop since I bought these. Lovely service too and three beautiful children who are very photogenic. I can see little Morgan in this. She'll be five on Sunday and loves pretty things. She has a good sense of what to put together too. 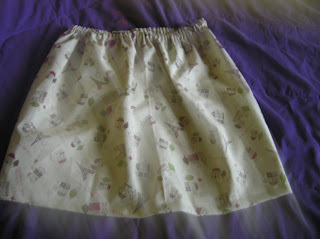 This one is for her cousin who's nine now. She's been learning French at school and hoped for a good souvenir from my son and DIL when they went to Paris. They have brought back a tiny Eiffel Tower for her. I also chose this for her as it's linen and her Mum is careful about washing and ironing things. I do know this will get ironed as linen needs. The colour here is a bit dark. It was late in the afternoon and I wasn't going outside to get the last bit of light. I tried the flash but that was even more inaccurate. I can see her wearing this over a pair of sassy leggings. It really has dark red contrasting pieces which seem black in this picture. 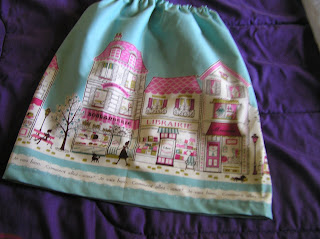 This last one is for MIss Seven or Miss Pink. Views of apartment living. She's dark and very pretty and loves pink. She's also very vivacious and this material will suit her.

All I did was seam, hem and run some elastic through. I would have preferred a proper waistband but don't know measurements. I did some research on drafting patterns and hoped to find some measurements but was out of luck.

Right now the elastic is held with a safety pin. After Christmas, the elastic can be adjusted and fixed properly.
So what about the two boys, one at either end of the age range? I'm thinking perhaps sme easy summer pyjamas or perhaps some boardshorts, or perhaps nothing handmade from me. I'll have to consider things. It's just three months till Christmas! What has happened?
Posted by Jan at 5:48 pm

Very cute bag!! I think it's such a bargain too!!
Love the little skirts, they are so sweet and the fabric is adorable!!!

At the recent craft show at Rose Hill there was a fashion parade of items made from out-of-date garments and op-shop finds [such as table clothes and sheets]. Your beautiful bag would fit right in! Well done!

Cute skirts! I wish you'd stop encouraging me to return to sewing - I don' t have enough time for all the things I want to knit without returning to another craft! LOL