echidna in the suburbs 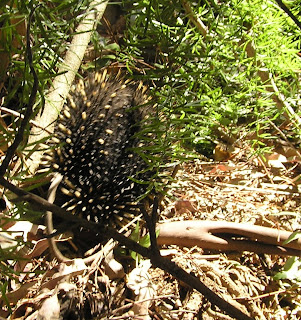 Yesterday when my son returned from work there was a small echidna on one of the front paths. Last summer, there had been snout shaped holes made in various places of our yard. We thought they may have been made by a bandicoot as they are known to be in the are and there is quite a group of them in the suburb, although not really close to us for such small creatures. However, those holes may well have been made by an echidna searching for ants, grubs, roots etc. 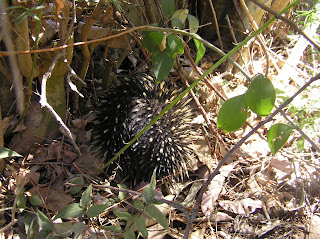 I had been in the laundry this morning and was coming up our 20+ steps to the backdoor when a movement caught my eye. It was the echidna again, well out in the open. Hurried up the last few steps and remembered I'd come out the front door and this was shut. Down again, around front, up the stairs and upstairs to my room to get the camera. Back downstairs and outside and it had vanished. so I did a bit of searching and finally spotted it. 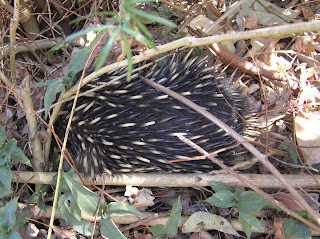 I finally found it fossicking in some leaf litter down near our back fence. It was very difficult to take photos. The access was poor, behind the large, heavy kauri table which I can't move by myself. There was little space between the table and the fence. I had to lie on the grass for some shots and take photos under the table. These did not turn out well so I've omitted them. There's really too much light/shade contrast for good photos and the multi-colour quills provide good camouflage. It was well rounded and looked quite alert and not even really very wary of me. There are plenty of fallen branches in our overgrown leafy garden which are in various stages of decay. Lots of grubs and ants there for an echidna and also lots of leaf litter to offer shelter to more food for it.

Apparently many echidnas don't actually hibernate, but they do eat very little during winter and stay at home, curled up. I've seen echidnas live in the bush and on bush roads and in the zoo of course, but it was a thrill to find an apparently healthy one in my own garden in suburban Sydney. It seemed quite at home too.

Obligatory knitting content? None really unless I make a comment that the quills looked as if they could double as double point needles!
Posted by Jan at 12:05 pm

i love echidnas! Lucky you to have found one! Their winter behaviour sounds like mine, except for the not eating very much bit!

Hi Jan, thanks for stopping by! I love thinking that the echidna is created from dpns! Imagine the socks!