a blatant bit of advertising 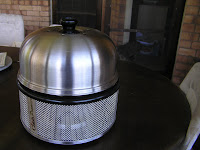 It's said that the best advertisement is a satisfied customer.

We have really missed having a BBQ here. The balconies make ideal sheltered, private places to enjoy the summer weather. Son had a plumbed in gas BBQ at his old house as did I, and we miss the quick availability of the BBQ. However, we really could not have had one conveniently here.

I saw an advertisement in the ABC cooking magazine delicious last month and was taken with this Cobb BBQ. I showed it to DIL and bought this model. This is stainless steel although there is a cheaper model in ordinary metal. This was the only one the stockist had. If you are lucky enough to have a boat, there is a bracket to attach it to the railing over the water.

We find the size is quite adequate for the three of us. We've had a couple of BBQs using it and I used it to roast a piece of pork neck which turned out very well indeed. A cup of liquid, wine, stock or beer, can be put into the moat for added flavour and moistness. 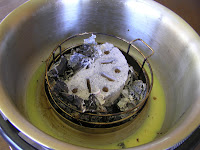 You can see the moat here. Not washed after the last use. It's easy to clean as is the grill which sits on top. It's definitely non-stick. Any fat from the BBQ drips into the moat and is nowhere near the flame, so there are no flares. Wrapped in foil, vegetables can also be placed here. Not only are there no flares, but the whole thing does not seem to spit, which is just as well as I left some knitting near it last time we used it.

The fuel we used is made from compressed coconut shells, although ordinary heat beads can be used. You can see the remains of half a cake of the coconut fibre. Ash can be put into the compost when cool. It has to be lit outside but can be taken in once lit. A huge advantage of these cakes of fibre is that once lit after placing them on some paper, they are ready to use in about two minutes unlike heat beads which take ages to burn down. There's a sturdy carry bag to use for picnics etc. The other thing we really liked is that the BBQ itself is cool to the touch, The metal mesh at the base is quite cool even though cooking is going on. Because there are no flare-ups it can be moved while burning. I said it was cool. We have cooked with it on this table without any damage or even a mark left on the table.

All in all, we are satisfied customers.
Posted by Jan at 7:53 am

A very comprehensive advertisment! You are obviously impressed.

what a nifty idea - it seems like a good way to have a BBQ without having a great hulking piece of equipment!