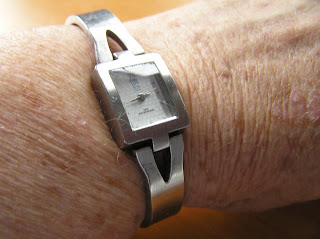 Over at badskirt is a list of possible titles for posts for this month. So here is "clocktober." All of these are personal, I haven't gone looking for other clocks etc through the house. I'm not a great stickler for absolutely exact time. My life doesn't run clockwork smoothly, pun originally not intended but apt nevertheless. Provided I don't miss any train I want, I'm happy. This is my everyday watch which I've had for some years now. I have an allergy to nickel so had to pay extra for this one. When I first bought it, it ran slowly even though the battery was replaced. When I took it back under warranty, I found the whole movement was replaced with a new one which just slotted in, as this was cheaper and easier than tracing a fault. However, since then, I've had no problems with it, other than needing a new battery. 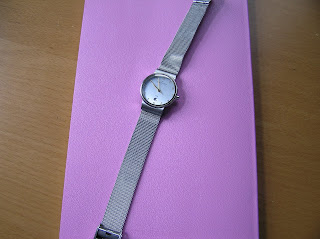 It was while I was waiting at a jeweller's to have the above battery replaced, that I found this watch which is on one of my Moleskine notebooks. It's silver too, which I prefer to gold jewellery, a trait I share with two of my daughters-in-law. It's a Skagen by brand, a Danish design. I loved the clear Scandinavian simplicity of the face which was very easy to read. When I found that all this brand's watches are nickel free, I bought it. It was not expensive as watches can be, but it was more than I really had spare at the time. However it was more than a treat for me. It marked the first anniversary of leaving an abusive marriage. Not physically abusive, although that came close several times, but abusive in many other ways. In the year since I had left, I'd been doing a lot of thinking. Still am actually, and am still recognising many more aspects which were not healthy. It's not that I brood at all. It's just that sometimes some memory is dredged up suddenly and I see it clearly for what it really was.

In that year, I'd had to face many things by myself. Opening new accounts, closing others, seeing Centrelink, getting credit for a phone etc in my own name. I was reassured to find that a check showed nothing untoward which would have stopped this, although my husband did not always pay accounts, rates etc on time. All in all, a weight had been lifted - a weight I had never really recognised as being as heavy as it actually was. A year to celebrate and this was how I did it. 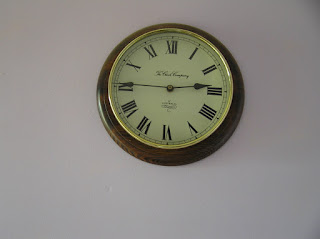 I've had this clock a long time. All it needs is a new battery from time to time. When my sons were young, I studied agriculture part time at night with practical work on many weekends. This was 15 hours/week, spread over three nights. Quite a different subject to my Arts, teaching and theology degrees and diplomas. The clock was the prize for topping a particular couple of subjects one year. I topped others too, but they had no recognition. 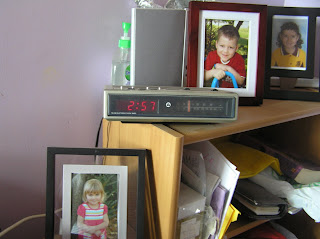 This last has sentimental value for me. It's out of place in many décors today with its faux woodgrain plastic finish and it's chunky, definitely not funky, design. It was my dad's and that's why I've kept it. He died eleven years ago and was in a nursing home suffering from Alzheimer's for seven years prior to his death. He'd had it quite a while before entering the home. It works just fine, although I almost never use the radio or alarm functions. It's shown here with pictures of my two youngest grandchildren. Middle granddaughter's photo is out of focus in the backgound shadow.
Posted by Jan at 8:12 am

Your clock tour tells us so much about who you are and how you came to be. Thank you for sharing with us! Happy Blogtober!

I am glad that you have been able to make positive changes in your life. I used to watch the clock all the time when I was in the classroom, but now I never wear a watch!! My watches were usually green!!!!

Thanks for sharing this Jan - I think your Skagen watch purchase was an exellent way of marking the anniversary. And your dad's clock - my husband has a similar one, kept for similar reasons.

Thanks for sharing - it was a very interesting post.