a little heart to heart 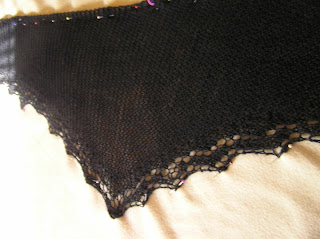 Fancy a little heart to heart? This is a scarf not a shawl. It is long enough to wrap twice around my neck and leave generous tails on each end. Probably more generous than they were last night when I had just finished it. Photo shows it blocking and it was actually very hard to get even a half decent photo of the edge. I finished it several days ago and will wear it out at the weekend (10th October) to Bowral where it's forecast to be even colder than Sydney has been lately.

The design is called Heart to Heart Scarf and is from Evelyn Clark Designs. I also bought her Shetland triangle pattern in preparation for more of a long lacy summer which Bells is starting up again next month. This scarf is described as a modified triangle. Actually, it looked like a gentle curve till blocking. The increases/decreases are done in the couple of stitches just before the start of the lacy edge. They are gradual, only three times in the twelve row pattern repeat.

The yarn is Bendigo's 4 ply Luxury in black. I've just used DIL's new digital scales and it tells me I've used only 70 gm of the 200 gm in the ball. That means I have more than enough to make another and I have just the person in mind for it. I did use 4 mm needles istead of the suggested 3.5, so that could well be a reason for having a fair amount left.

On a completely different topic - here's little bit of useful information. Disposable razors work much better when the plastic safety cap is removed before use! Admittedly, it was clear plastic, not solid white or yellow, but I must have been more asleep than awake this morning in the shower.
Posted by Jan at 9:00 am

Black is such a difficult colour to photograph. I'm sure you scark is lovely; the edge is pretty.

BTW, thanks for the heads up about disposable razors! ;-)

That, of course, should be scarf not 'scark'! I must teach myself to look at the screen not the keyboard and/or to proof-read carefully!!

It warms the cockles of my heart when I see that I am not the only person who does 'interesting ' things!!!

ooh thanks for the reminder! And for another post idea. Phew! Much appreciated Jan!