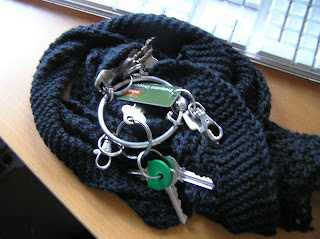 Here's my current bunch of keys, small in comparison to last year when I had several more attached to the ring. Since I've stopped working, I have been able to get rid of quite a few keys which I needed there. Three of these keys will be gone shortly too, although new ones will replace them. The owner of this house has just this weekend told us he wants the place back and our last day here is to be December 4th. While son and DIL own quite a few properties, they are tenanted and not really suitable for us unless we were to move to Queensland, a move which is not practical for any of us. So we are starting to pack as from today and also looking. Ideally, they would buy a converted warehouse, somewhere in innerwest Sydney. DIL wants a studio, room to move, open kitchen, living and entertaining areas. We would settle for a large older house in much the same area. We love the trees up here, but there are lots of leafy places around the inner west and we all like the vibrancy of that area. Son wants to be back on the trainline which suits him for work. Currently he's in a government consultancy at Liverpool which is 90 minutes by train from here. He drives and that's 50 minutes away and several tolls on the M7 expressway. Innerwest living would halve tolls, time and train travel. His position is secure there for a long time yet. So we are out looking. 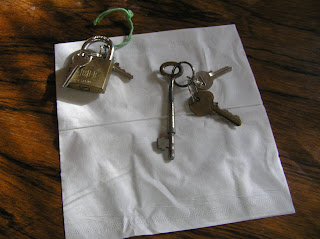 Here's some more random keys from around here. I could have shown several more padlocks here which were left by the owner but have no keys attached. The bigger old back door type key fits nothing here. Actually, there are no locks of that type here at all. The owner is a hoarder, quite unable to throw stuff away. But why would you keep a common key like this when there is no lock around where it could possibly be used? Even the laundry door downstairs has a Yale type lock on it, although we've never been able to find the key to it. As the laundry door blows open in the gales we get here, we've wedged it shut with an old shopping bag attached to the door handle. An unusual lock perhaps, but it's effective. If we don't do this, the wind whistles through the laundry and two floors up, the blast is strong enough as it funnels up the laundry chute to blow open the drawers in the vanity unit in the bathroom! 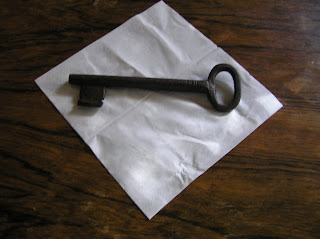 Just have a look at the size of this key! DIL collects unusual objects from all over the place. I find it difficult to imagine the size of the lock which this key would have fitted. Perhaps it came from a gaol? It's quite heavy and obviously also quite old. Not the sort of thing that could be easily hung from a key ring. Not even the sort of key which a chatelaine of the nineteenth century would have had hung from the keys swinging from her belt. I see it as something like the key the gaoler would have clicked locked on poor Toad when he was in prison! The Wind in the Willows has been a long time favourite of mine since childhood. 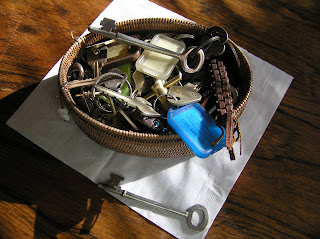 All these keys belong to this house although we don't use them much. We have a back and front door, downstairs laundry and downstairs cellar which is used as a cellar with a large amount of wine in it. In addition, there are nine doors to outside balconies. Yes, nine! There are nine balconies here some of which we don't use but we wanted to know the keys for the doors. When we wanted to unlock them when we first came here, it took a long time to find which key went with which lock. The house was built when no-one really appeared to have thought about the convenience of having locks keyed alike. The owner has over the years fitted keyed locks to the windows as well and he wasn't sensible enough to get them keyed alike either.
Posted by Jan at 5:00 am

Oh dear, a regular "Fort Knox"! It's sad that you will be leaving your current abode; you seem so happy there and the description of the balconies off your room always remind me of a princess in a castle - I don't know why!