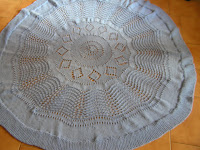 Herewith one pi blanket. Certainly it's more than a shawl. I measured it after unpinning and it's just over two metres in diameter. This was a real stashbuster. I've used almost the full twenty balls of the Cleackheaton Country which I had in my stash. That came in two lots, acquired from separate sources but the same dyelot. I really can't remember why I had so many balls in the first place, but I wanted them used. I had started some charity knits and hats but each time something went wrong so they were frogged. Twenty balls equals one kilo in weight. I've been thinking about where I might finally settle and the choice seems to come down to the Southern Highlands or the Blue Mountains, both cold places. This is more than an ample size for my current bed which is a double size. I'll be buying a new bed whenever I move, as this one belongs to son and DIL. I'll get a queen size, so the blanket will still be adequate for me.

This blanket is based on Elizabeth Zimmerman's pattern* I substituted feather and fan in the middle section and used a repeat of eighteen stitches. Both eighteen and twelve stitch repeats would have fitted the stitches I had. She talks of a blanket the sixe of a 'football field." However, hers was based on much finer wool than this 12 ply. 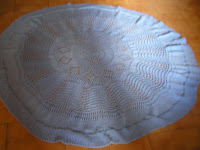 It's shown here on the hall floor. Apart from outside on the grass, I could not find a space big enough which would still take reasonable photos. I tried other floors, but the darker carpet colours drained all the colour from the shawl. Outside is covered with twigs and leaves from the gales here lately and also probably still has a great deal of red dust on it.

Aside: dust? I have some oak leaf lettuce growing in a tub on the balcony wall. Although they were planted only three weeks ago, they have grown enormously. I picked enough leaves last night to mix with some rocket for a salad. I soaked them in a bowl of water for about five minutes. Although the leaves had looked green, there was a distinct reddish tinge to the water. I washed them several time before I was satisfied we would not be eating dust from South Australia with our meal.

I really didn't enjoy the process of pinning it out. I used a king sized doona cover and put that on the lounge floor. Starting in the centre, I worked out through concentric circles. Far too many pins to count! Now I can usually manage my arthritis reasonably well. I know my limitations and work within them. However, this was outside those limitations. I sat on the floor, sat on a cushion, knelt on floor, knelt on cushion, sat on a small garden stool, bent over. At the end I was so stiff I could hardly move and I'm still not very agile the next day. I tossed and turned last night in an attempt to be comfortable for more than a few minutes.

The ruffles shown in the photos are not so much poor blocking but lack of space. One edge is up against the stairs and the opposite side is against the enormous antique dresser.

It's a giant blanket!! What a wonderful thing it is to behold and how warm you will be snuggled under it!!!
Good luck with The Blogtober, I am participating too!!!

OOOOH so pretty - and so big!
How lovely and so so pretty
Good luck with Blogtobering!

Wow, that's huge! It's just lovely. And I don't think you can go wrong with the Blue Mountains or Southern Highlands - both beautiful places with lots of nice cold knitwear weather!

it's enormous! No, pinning out the big ones is not fun. Not fun at all. But it's great! Well done!

My goodness. That is a huge blanket! Well done!

What a simply gorgeous blanket, and yes that is a great way to use your stash too. It must have taken some time to knit that up.