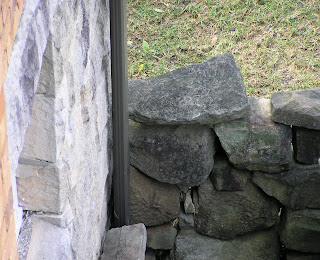 Badskirt has a list of possible topics to help out if needed for a post a day in October, blogtoberfest. Some bloggers are treating this as a calendar and following day by day, others, myself included are using it for suggestions. So here is "rocktober."

This house is built on Sydney sandstone. It is an art deco design, built about 1929-30 and is built on a steep slope. The picture shows some of the massive sandstone foundations. Parts of the foundations are higher than this wall. This area is over three metres high and is made from huge sandstone blocks. The back steps, over twenty of them, are concrete, but the outside of them is sandstone. Front steps are a massive, sweeping curve of more sandstone. Some of the window sills are yet more sandstone. Most of the garden edges are sandstone set in the ground. Some of this is covered by grass as the shape of the beds has changed over the years. Many of the paths are sandstone flagging and the steep drop from the footpath along the Pacific Highway has several terraces banked by more sandstone.

The picture also shows, although not very clearly, the dryrock wall, more sandstone which hides the rubbish and recycling bins which I've cut from the picture. This is not a professionally built wall as can easily be seen in real life, but it does the job. 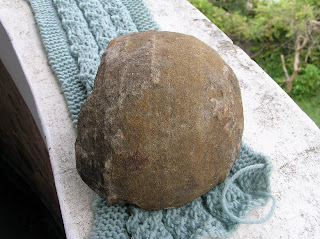 My youngest son had a passion for rocks and stones when he was young. I wondered if he might become a geologist. No, he's involved in computers in a a particular area in which few people work in Sydney. However, as a child he always brought home rocks and stones when we went visiting, or on holidays or picnics. My washing machine would not empty once many years ago. Out came the repair man who was there nearly two hours trying to fix the problem. Or at least, trying to find the problem. We eventually located it. A largish stone, which had obviously been in one of Tim's pockets had become wedged in the hook of the outlet pipe, right where it hung over the tub to drain. That was a very costly souvenir stone.

This is another of his souvenirs. We used to have a holiday property, forty acres, at Wollombi near Cessnock. Exploring up one of the creeks one day, he brought this lump of rock back. More sandstone, but looking almost as if it had been scooped from a larger rock by a gigantic melon ball gadget or perhaps an icecream scoop. It's flat on one side, but very nicely rounded and shaped on the other. I use it as a doorstop now.
Posted by Jan at 8:15 am

Oh no, you are squashing your lovely knitting with a rock!! I like the rocks and minerals in our museum. They have lots of crystalline things and a whole section that glows in the dark when you press a button!!
I bet your were cross about the rock in the washing machine pipe at the time. Now it's a lovely story about your son!!