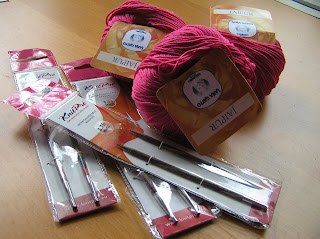 Morris and Sons (Tapestry Craft) has their sale on again.  I wasn't going to indulge but surely I needed more Harmony needles?  Why yes, I really did.  Really, really did.  I left home just before 9:00 today and was in the city at 9:30, thanks to a train which skipped some stations. Home again by 11:30 and that included a cup of coffee.  I didn't look around much in the shop as I didn't want to be tempted too far.

I was surprised.  I was the only customer in the shop when I arrived.  When I left a few minutes later, one other had walked in.  I had planned to go on Monday, but it was very wet, blowing a gale and  quite cold here so I stayed inside.  We even turned the heater on that night we were so chilly.

I've been making a little top for youngest granddaughter and using some Bendigo cotton which I already had.  My plans were to knit entirely from stash during Blogtoberfest.  However the  top I'm making was just not working in what I had.  So does it count if I buy more to replace something I had??  It will be put to use very shortly.  It never even made it to the stash and the Bendigo cotton will be returned to stash.  This particular lot seems ill-fated.  I was making each of the girls little ballet cardigans.  Two have been given and were liked.  The third was to be made of this cotton.  I've done one front.  However, I made another cotton top for that little girl so started  something for a Christmas present.  My brain was totally fried with stress and a headache that day and I ripped it three times because I could not concentrate on the arrowhead yoke pattern.  Since then I've struggled with it and it just wasn't working in my mind.   I was tired of the pink, somewhat insipid. 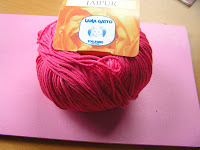 This Jaipur cotton seems crisper and I think it will work better.  It's certainly not insipid.  It's shown here on my pink Moleskine knitting notebook.  It has some zing and zest to it, and is a pinky, cerise colour. It will suit little Miss Blonde well.  I might even get the yoke pattern right first time around, it's not difficult, just requires some concentration.  The pattern is LLani by Katya Frankel  here. The pattern covers sizes 2-12. This cotton was also $7.63/ball.
Posted by Jan at 12:37 pm

I love the Jaipur cotton (although I've only crocheted with it, not knitted). Gorgeous colours, very soft. And it was on sale, so I think that means it doesn't count as stash!

I don't think a sale counts either!! Hope your head stops aching and your knitting goes well.

Shazam! I am knitting that same top for Caitlyn, and it is swimming along gnow that I have come to grips with the fact that it is top down. Its a lovely pattern and goes really fast.

I wa there last Friday afternoon and they were quite busy! I did some Christmas shopping - something for me from my parents and some things for DD who has always used my needles, stash and storage but needs to start building her own!

pfft. Sales. They break all the rules!