heart to heart scarf and a break-in 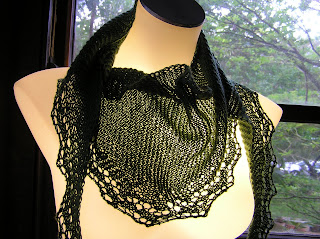 Second last present needing my creative attention.  This is Evelyn Clark's Heart to Heart Scarf, take 2. It's for one DIL and is made from the lovely Grignasco Bambi again in the same dark green as the second Aestlight that I made.  Very deep green a lovely, restful colour.  Green, I tell you, not deep charcoal.

My model has claimed all the attention for herself and taken the colour from the scarf.  Actually, she's one of the many naked ladies around here.  Neither DIL nor I are in that category!  This one has a light inside her and she glows softly.  I chose her to model the scarf so the lace edge could be easily seen.

There are several shop dummies around too.  A dressmaker's model is in one of the bedrooms, there's a black wire display model outside my room, and probably another three shop ladies around the place.

Add to those, the busts of naked ladies which are grouped on the sideboard and the rather beautiful painting of a nude in the main bedroom.  None of my grandchildren likes any of them.  They don't giggle and are not shy about them, but they don't like them.  Each of them has expressed a dislike for the naked ladies who live here.

I've been packing, sorting and throwing out  today.  I feel guilty about watching DIL pack, because after all I live here and enjoy the benefits.  I should share the less pleasant bits too.  However, she has so far refused all offers of help and is well on the way to having most of the easy bits done, like books in the thousands and a lot of crockery.  There's the pantry to go, personal stuff, clothes.  We have had date confirmed as 16/12 to move. 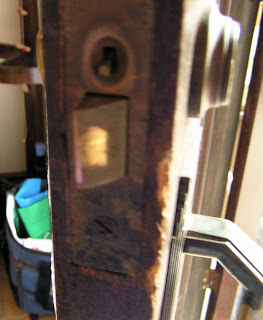 Last night I saw son photographing the door.  He pointed out where the lock had been forced with a screwdriver and bits gouged out of the door frame.  There are two locks on the door and I think this would be about 80 years old.  It seems that when this one did not give, the would-be burglar ran off.  We're not quite sure just when this happened, but think probably Friday.

Actually, I think I may have scared the thief off.  I was home alone on Friday, all weekend actually.  DIL was out in the morning and early afternoon.  I was upstairs and heard a noise as of lock being opened.  I called out to what I thought was her, as I went downstairs because I knew she would have parcels to get inside.  There was no one there, although there had most definitely been a noise.  The lock itself has had a screwdriver forced inside it and the back handle is floppy although the key still works.

Owner is very annoyed about the damage. He just about worships the place here.   It's not as if we did it ourselves!  We spoke to police this morning and were given an incident number.  Surprisingly only 45 minutes later we had a very jovial Senior Constable and his sidekick at the door.  Their comment was that the only way to secure the house was to have bars and security doors.  There are nine doors to the outside.  He said he'd put in a report but not to expect results although he would send finger print people around.  We report it only to be able to tell owner we had done so.  We're well aware nothing will come of it.
Posted by Jan at 4:02 pm

I'm so glad to hear you are safe and only the lock is damaged. Very prompt police service too.
Oh BareNakedLady! She is stealing the colour and I know it is beautiful. The lace shows up wonderfully though.

I did not know you could get dressmaker dummys with a light inside - very cool. I wish I had a dummy, they are very handy for modelling the knitwear.

I'm glad only the lock was broken and nothing stolen, how lucky that the would-be thief ran away.

I'm so glad the would-be thief didn't get in; no telling what may have happened to you had they come upon you and been surpised!

Gorgeous scarf; interesting model - it is possible to tell that it's a lovely dark green!

ooh how frightening! We are so vulnerable really aren't we? Glad no harm was done.

And that heart to heart shawl looks just gorgeous. With the light too!