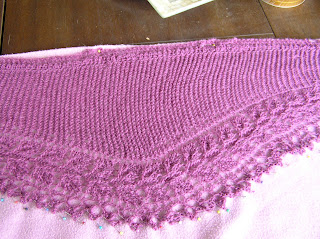 I finally blocked the lacy kerchief scarf.  It's huge, at least three metres long.  I left out at least thirty rows of the pattern in the middle.  Can't really remember just how much I omitted.I had to block it on my blanket as I have packed everything else I could use and DIL has packed linen cupboard contents.  I love the colour of this Bendigo 5 ply,it suits the pattern. 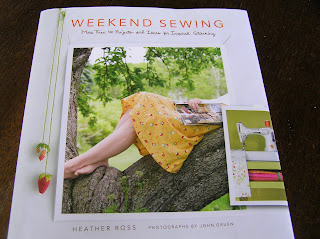 Each of those little points in the lace uses 4 rows.  Lots and lots of points and pins too to block them.  I have had no reply to either of my emails to IK regarding the dreadful layout of this pattern which is being sold at a comparable price to many other well laid out patterns.  They've lost me and I've I've also unsubbed from their daily email and tips.  No more magazines either from me.

Christmas came early for me today. DIL arrived home with two of the three books I'd ordered from the Book Depository at 10% off their already low prices.  This is one of them, the third is a book of vintage baby knits which is still at PO.  I'm looking forward to some sewing once we move, if ever we do move.

Actually, we have to move by next Friday, 17/12 at the latest.  All packing except pantry has been done.  However, the bank has royally messed son and DIL around and moving to where we hope to go may never happen.  Not "which" bank, not the one which sells bananas instead of mortgages, but the proud icon of the old British saint.  They did not let son know they were over a month behind in drawing up papers for mortgages.  Nor did they tell him they were undervaluing all properties, so he would not get the amount both promised and approved but 20% less.  That leaves shortfall available  of a six figure number.  Not a lot as money goes these days, but son has been frantically trying to find someone who could lend him this amount till mid-January.  Many would help but can't access their money till the new year.  Time is running out. Stress  has caused psoriasis to flare on my scalp and my feet have been attacked by arthritis and are badly swollen particularly under instep.  Both are autoimmune disorders and both react badly to stress in me.

I also took photos of the first instalment of the yarn from Ailsa's yarn club.  I find photos, cooking and sewing are related in a strange way.  If I have a headache, am annoyed or generally out of sorts, any one of those things does not go well.  Bells has a great photo of her box.  Lovely yarn, an interesting sock pattern for it, some Ghiradelli chocolate, some tea, a lip balm and a packet of sock needles, just the length I enjoy using, were all beautifully boxed.  I'm looking forward to the next package.

It's been while since I posted.  The black dog has been snapping around my heels.  This financial mess hasn't helped.  I've bought and wrapped all presents but  was remembering the thorough job mum did of buying presents.  She had the knack of finding something unusual.  First Christmas without her. The anniversary of the end of forty years was two days ago and #2 son was given notice last week.  All good cause for black dogs but I'm determined not to give him a home.  A brisk daily walk helps but my feet are too sore to do more than hobble.
Posted by Jan at 8:36 pm

Sorry to hear about the bank woes and other bad news, but hope things are able to be sorted out about the loan soon and the move goes smoothly.

Your lacy kerchief is gorgeous, and you are right, the colour is perfect!! I saw your lovely new book and went to see if It was in our Library, and I already have a hold on it!! You'll have to let us know what it's like.
I am sad to hear about the whole Family Financial Crisis. If you were a month behind, all hell would break loose.
Getting through special times without someone is always hard. The Labradors and I are sending you lots of positive thoughts.

Hard times for so many these days - of the 4 dults living in my house right now, only 2 are gainfully employed, and not for lack of trying.

Hang in there. My thoughts are with you even if Interweave is not. LOL.
Linda

sounds like you're having a rather bleak time of it at the moment. It's hard isn't it? This time of year can come with so many added challenges.

I think a few people are getting shirty with IK and the daily stuff lately. It seems to be not doing much for people at all!

Oh Jan, I'm sorry to hear that you are being plagued by the black dog - I can relate to that so I both sympathise and empathise!