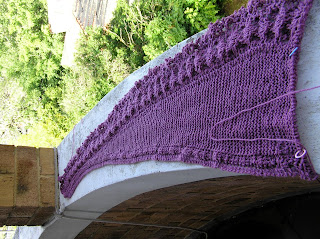 An early morning picture of the lacy kerchief scarf half done.  The colour is  a bit dark here but everyone who's seen it has admired the colour.

Actually, it's half done according to me, but the pattern suggests it needs another seven repeats to half way.  As can be seen, it's quite long now and will be longer blocked.  The pattern suggests worsted weight done on 4 mm needles.  Now I've seen a variety of weights of wool in USA patterns, all labelled worsted, but everyone of them has been quite a deal heavier than this 5 ply Bendigo wool which was in my stash.  I would not normally use their Classic wool on this sort of pattern preferring something not a crepe construction, but it was there and I wanted to start.  It has some drape to the feel but I think worsted done on 4 mm needles would be very heavy and stiff.  I'd probably use 5 mm for worsted. 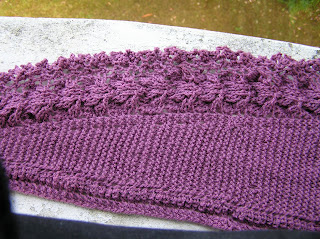 I'm quite enjoying the pattern but would make some modifications next time.  As I said, I've already decided this is halfway so I'm on the decrease side of things now.  The increases in the main garter stitch part of the material are done by a yarnover.  To me, this breaks the smooth garter stitch which I love.  Another  scarf will be done with a knit front and back for those increases..  The increases are done every six rows but the pattern repeat is eight rows.  No big problem but inconvenient to remember without making a note each time.

It's a bit hard to see the lacy edge but it's quite attractive and will look even better when blocked.

Interweave Knits?  As I explained in the post below, the pattern is appallingly presented, especially when patterns currently available are so attractively laid out for the most part.  Space and clarity play a part in making the pattern look good.

It's now eleven days since I emailed IK about this presentation.  Result?  Zilch.  Silence.  Not a word.  Linda from the USA left a comment about this on the previous post.  Her experience was the same and she tried a second time asking for a response.  Nothing.  No response at all.  I'm fairly certain this will be my experience too.  How incredibly rude to have not even an automated response sent to an enquiry.  There has been some discussion lately on several knitting lists abut magazines and the often poor service given by companies.  I think that with the ease of buying patterns etc from the internet, the one thing that will bring repeat orders is good service.  I've found that when I buy yarn online, the service from every vendor has been very good.  I'm happy to give repeat business to the vendor.

However it appears that many of the magazines think the consumer is there for them.  Now obviously, this is partly true.  However poor service will lead consumers elsewhere.  Some magazines seem to pay lip service to using the net.  Some have quite elaborate sites and facilities.  However, IK has lost me as a customer both of the printed magazine and of anything sold online with their attitude.

Today is the day I pack my knitting stuff aside.  I'll keep out this scarf and another which I have started in laceweight as an experiment.  My own design, it will not be finished quickly.  I have one more lot of wool coming to son's PO box before we move.  It's the first instalment of three lots from Ailsa.  I'll slip that in somewhere.
Posted by Jan at 9:18 am

I love the colour.

It's an unusual design - I'm looking forward to seeing the finished scarf.