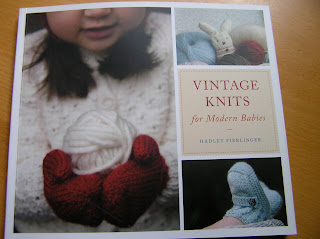 Thank you for your kind and encouraging comments.  It seems as if all will now go ahead, although Thursday and Friday were very tense days.  My son spent most of both those days desperately trying to find an immediate source of a large amount of money.  I mean large.  Not easy at almost the end of a quarter an particularly at Christmas.  Lots of money available, even from the bank in mid-January, but we did not have that time.  He still looks very drained and tired, he has a very high powered job which has been full on for a couple of months now.  He often has 7:00 am meetings and may not be home till well into the evening.  Moving will mean he is much closer to work and he'll be on a direct train line.

Then, late Friday afternoon, offers of help came flooding in from some very unexpected sources indeed and it appears all is now well, although in a month that particular bank will lose his business.  I spoke to friends at the weekend whose daughter runs a conveyancing business.  She said this sort of thing happens frequently.  If we were caught by a month's backlog causing problems, then there must be other people in the same boat as we were in.  Just disgusting.  No communication and a downgrading of the amount both approved and promised.

This is my third order from the Book depository.  The middle book was not knitting related.  It has some lovely old patterns in it, a little pixie hat with ties, some beautiful booties and more.  I thought it might be handy for special little gifts.  I already have Exquisite Knits for Cherished Babies, so should be well  set up now. 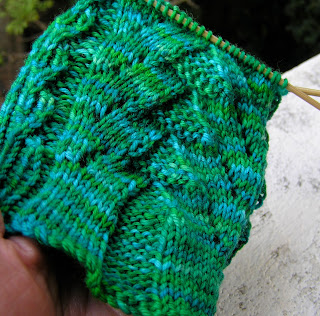 I haven't done a  sock for a long while.  I started this because I wanted something small I could easily pack in my bag, something small which I could do a pattern repeat in quickly.  The pattern here is an eight row repeat.

I'd tried a few designs lately but really hadn't been motivated.  However, I'm really enjoying this sock,  from Ailsa's wool to her design.  I've now done four of the eight pattern repeats suggested for the leg.  There's another tiny cable, twist really, to the right of the main pattern which is centred over the instep.  I'm stretching the fabric out a bit over my fingers.  The wool knits up easily and makes a very even fabric.  Both the stocking stitch at the bottom of the photo and the purl inset are very even indeed.  The colours go well together.  I have nothing like this so these socks may well be just for me, although I already have a lot.  I think I counted about forty pairs when I packed them, but as that was a few weeks ago, I've forgotten the exact number. 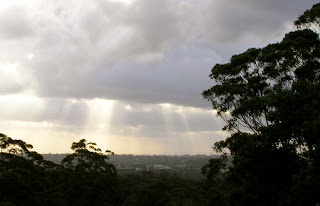 Finally, just because I can and because there will be only a few days left here for shots like this...  I have a few photos like this, some in almost direct sun and some with the sun shining through the clouds.  The first time I took anything like this, a friend told me that this was called the "fingers of God."  I'd never heard the expression then but have heard it several times since.  I think the sun was coming through clouds about 50 km away.  I've used the zoom here.  The formation was much wider than this, but this was the prominent part.
Posted by Jan at 7:40 pm

I used to think that those rays were god talking when I was little. Maybe I watched a tad too many Biblical sagas!!!
Love the sock wool, I have wool envy, and the pattern is so lovely. Your stitches are very even and fine.
Banks just don't care. I ahve learned that most institutions don't care about individuals. As long as they get their money, they are happy. I am so glad to hear that your son was able to obtain the giant amount of money.

I'm glad to hear the money stuff seems to have been sorted out, just what you all don't need at this time of year, added stress.

Thank goodness for knitting, lovely sock and yarn from Ailsa, it looks fantastic. And I've been thinking about that book too, although I do already have about 5 baby knits books, so I probably don't really need it! It does look nice though...

Oh my I used to think just like Cindy - those rays were God talking, although not to me. I just thought God was talking to someone else. Ha, I wasn't the only one!

Glad to see you're knitting Ailsa's sock yarn and pattern - I love seeing it around since I don't have time to knit it myself right now.

The sock looks great! I'm knitting some too - so therapeutic!!