Back again after several very busy and often frustrating weeks.

The house move was absolutely horrendous, worse than I had imagined it could be.  After a run of days with temperatures in mid-20s the morning arrived.  It was hot and became hotter through the day till maximum was 40.  Horrible weather for shifting stuff. 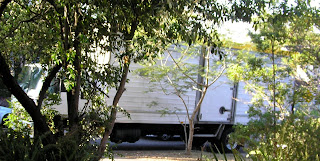 This absolutely enormous  truck, probably 7 tonnes,  arrived in our driveway at 7:15 am and was backed in on a slant so a ramp could be laid across from top of driveway wall to truck, thus saving removalists 12 nasty steps.  The manoeuvre meant that quite a bit of it poked out into the busy side street.  The truck was full by noon.  Settlement on the house had been scheduled for 12:30, so truck and men set out about then. 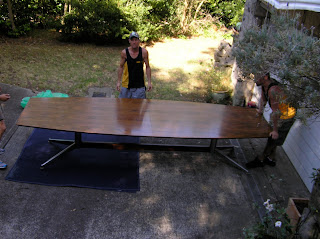 The truck was full, but that didn't mean everything had been packed.  DIL has lots of odd shaped stuff which took a lot of space.  This is their dining table.  It came from a boardroom in a business and seats sixteen people.  It's a Parker table and yes, there  were the sixteen Parker tub chairs to pack as well.  Full size is not really apparent here.

St Dragonslayer bank kept up their frustrations to the bitter end.  Not content with miscommunication and being a month behind in drawing up papers, they totally failed to show up for settlement, despite everyone else needed being there.  They claimed they knew nothing of the time, but this is impossible.  Such things need agreement among all parties.  So enormous truck and its crew sat in our small suburban street being paid by us for doing nothing for three hours while settlement and handover of keys was rescheduled.

Meanwhile, back at Killara, I was supervising cleaners and carpet cleaner and keeping an eye on the remainder of goods still stacked in the driveway.  The truck arrived back late afternoon with another two workmen, making five in all, to get job finished.  DIL and I handed house keys over to owner's son and set off.  On the way here, we bought beer as an extra reward for the removalists and I was stuck in son's small Citroen  van with two cases of beer on my lap and an African violet balanced on top!  We waved goodbye to the five guys at 9:15 pm after giving them each a case of beer. We fell exhausted into bed, thank goodness for keeping clean sheets and pillows accessible!  Next morning I wasted  no time in getting the priorities unpacked.  Coffee, grinder, plungers, kettle, coffee machine and chocolate were unpacked.  That said, the Pavoni machine and the old grinder have since been replaced with  new machines which together produce a really superb cup of coffee.

We very much like it here and are probably unpacked more than we ever were at Killara.  The place is being painted, not strictly necessary, but I think son is putting his stamp on the place.  When that's finished, we'll get the large number of bookshelves up and get the books unpacked.   That will give space in the underground garage for DIL to ready a studio for herself.  There's probably well over a hundred boxes of books.  Art work will be hung using a professional hanging system.   We found our third floor balcony gave us a good view of the new year fireworks.  We could see in a straight line  down to the Cockatoo Island launches, could see Darling Harbour well and a couple of other sites too.  We could get only a glow from the bridge.  We were all tired so watched the 9:00 pm show and then went to bed.

More frustration in getting net access followed.  Telstra rents their lines to all other internet providers and a batch file for each of these should be run daily at night to update.  Son turned our phoneline on by ferreting around in their site.  Technician has never shown up, nor has an explanation been offered fopr that.  However, the business which is now privatised, still runs like something from the 1950s.  No update, no update, no update.

Finally, when they were within hours of being under a financial penalty for not doing what should happen automatically, it happened.  Batch file for our provider was not run from 21/12/09 till 05/01/10, the next year.  We missed out on free access for several months by a couple of hours.

Knitting?  Not much.  I have finished Ailsa's first Shantaram sock and am well into the second.  I'm enjoying the pattern, the colour and the wool, although I did make a horrible mistake one night, knitting when I could not sleep.  24 rows later I realised what I had done and ripped it back.  I'm also working on a Commelina scarf.  However, I must have omitted a yarnover a couple of rows back and my stitch count is out.  I'm going to take the time to chart the pattern.  The original isn't charted and I can't seem to find anyone else who has done this.  At least the pattern will be more obvious and I'll hopefully be able to spot mistakes quickly.  I find it hard to believe it wasn't charted in the first place.  I equally find it hard to believe that I am admitting that I now prefer charts to words.  Something about teaching an old dog new tricks.
Posted by Jan at 11:11 am

Oh Jan, I'm sorry the move was so awful but glad you are settling in nicely into the new house - I think it's always a good idea to paint while it's still relatively empty - so much easier than having to move heaps of stuff (especially books and bookshelves!) later.

Hmph Telstra! I feel your pain! We moved on 15 Dec 08 and couldn't get our phone on for ages, and our internet took even longer. And my mum's phone went out on Christmas day and wasn't fixed until New Year's Eve. Wouldn't have been so bad if she didn't live by herself or have a mobile phone...sigh.

I am glad that after all the obstacles in your way you are in your new house and happy!!
Don't speak to me of the Telstra people, they are not helpful really at all. Typical that they fix things up at the last possible moment.
Not much knitting here either, it's been too hot.
I am a chart lover as well. I colour code all the symbols!!!

Don't mention Telstra to me eother unmless you have several hours set aside for a ranting harpy!
Hugs

I'm glad you're back! Sorry to hear that all has not gone as smoothly as planned. Hope you've settled in well.