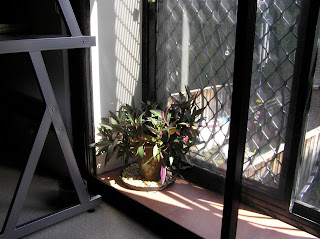 It's very hot here today but not as hot as Canberra was last week.  However, my room has been shut down till just a few minutes ago.  The room is at the back of the house, facing southwest and overlooks our pocket handkerchief sized back yard.  I don't have a window, I have a double door.  Actually, two double doors. On the outside is a security screen and a sliding door, both key lockable, although this is the middle floor of three and the wall is perpendicular with no obvious places to climb.  I keep the screen door locked and lock the other if I close it.  Then there is a space which for want of a better word, we are calling an airlock.  It's not huge but is big enough to stand in and move in.  Then from that, there is another sliding door directly into my room.  Today I've had both doors shut and the blinds let down.  It's very effective against the heat and I think should also work well in winter.  The dining room, on the floor below my room has the same system, as does the door to third floor terrace.  The front door and the front room on this level work the same way but have a much larger space.  Downstairs is still full of boxes of books.  I think both these areas will have big shelves in as DIL and I both have lots and lots of books. 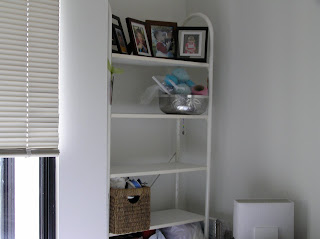 We've been painting and everything has now been done bar the garage which is huge and underground.  It's about 12 metres long.  The place looked fine but it now looks better.  I left  a lot of unpacking till the painting had been done. These shelves were not what I would have chosen but the price was right.  They are very sturdy and fit the alcove as well as possible, short of custom made tracking and shelving.  They were discarded on the footpath by a tenant leaving two doors down.  I need to sort some more wool etc for the space still left.  I also scored a more than presentable bedside table.  Others I liked started at about $150. 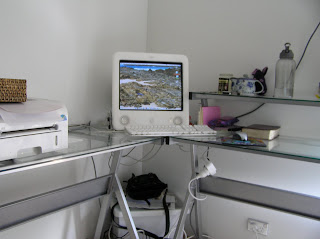 Here's a photo of my desk.  Have a look quickly, it's still tidy.  I bought this on eBay from a volume seller.  Harvey Norman sells them for almost $250 and I paid $120 and put it together myself.  It's open and airy and suits the room.  My eMAc is aging and I'll probably replace it with a Mac notebook sometime this year.  Son gave it to me over 5 years ago and I'm now a convert to Macs, despite almost 30 years of using a PC.  It's been amazing, not one problem with it.  Our network runs on an ethernet system which uses the power wires through the house.  We're all wireless enabled but this house is very solidly built with lots of concrete and wireless, even upstairs looking out onto the city is a bit dodgy.  Each computer plugs a small box into the power point and son's server upstairs has the main connection to mine and probably five others. 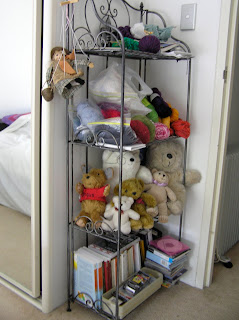 Knitting??  Well yes, I have been doing some each day.  Here's the proof.  There are several WIPs on the top shelf of this stand. There's a longstanding scarf which is done every so often when I want something mindless.  I should finish it, there's not much yarn left.  There's a grey variation on Commelina and the pattern dictionary I'm using for it.  It's in Zarina.

Ailsa's Indian Summer Yarn club has two WIPs for it.  I'm on the second Shantaram sock and really like the way this is knitting up.  There's also the absolutely gorgeous 50/50 merino and silk in deep purple.  I'm almost finished the garter stitch part of her capelet pattern and have about ten rows before the patterning.  This yarn is amazing.  It has a beautiful sheen to it and has taken the different purples in the dye really well.  It's a pleasure to knit.  It feels fantastic as it moves through the fingers and knits very evenly.  I can see more of this in the future.

The mirrors at left of photo are my wardrobe doors.  I'd rather not have a mirrored wardrobe but that's what  is here.  I've never had doors on a wardrobe which operate so smoothly.  It doesn't matter which one is in front and they slide very smoothly.  The door at right leads into my bathroom.  Three bedrooms here and three bathrooms as well as a fourth toilet in garage. 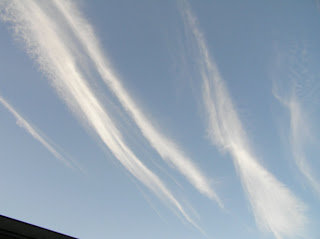 Just because I love sky photos, here's one.  From the third floor terrace outside we look over the city.  I feel I could almost touch Centrepoint Tower, then we scan around and see the antennae towers at Artarmon with Chatswood behind them.  We're not far from the harbour as the crow flies and get a beautiful breeze most days. Wentworth Park racecourse grandstand is obvious as well as lots of older buildings and warehouses.  I can't quite see Witty Knitter's area from here as it's over the crest of a hill.  However the spire from the Hunter Baillie Presbyterian church in Johnson Street, Annandale, is quite clear.  We had a very good view of  much of the New Year's Eve fireworks, although we were all so tired we went to bed after the 9:00 show.

Now we're more unpacked and are very happy here, I hope to get more knitting done.  Arthritis in fingers has been bad and I have felt bad myself about knitting when the others have been so busy unpacking painting etc.  I've been busy providing cold drinks, getting meals, stacking and unsatcking dishwasher and other mundane matters.

The location is very convenient.  Ten minutes walk up the road on one side of the trainline leads to the Enmore Theatre on Enmore Road.  The same time on this side of the line brings me up at Newtown old Town Hall or I could cut around the back and come up to the police station and the pub there.  Another couple of minutes and I'd be at the Dendy movie theatre.  It's about six minutes to Stanmore station and a couple of coffee shops I haven't yet tried and about twelve minutes down to Parramatta Road or to Stanmore Maccas if I was absolutely and utterly desperate.
Posted by Jan at 6:35 pm

Thank yo8u for the lovely tour. I like the little airlock, nice to have a kind of insulation from the weather, hot or cold!!!
Glad you are getting settled in and finding some time to knit, when your arthritis allows.
It's been hot here too, and overcast so no lovely sky blue skies!!!

I was pleased to hear that things have improved for you after your recent upheaval! I love my little mac and would not go back to PCs now

How nice to have a little tour of your new home! All looks and sounds very comfortable, and such a great location - now all you need is a yarn store within walking distance and you'll be set!

Thanks for the tour. You sound well situated. I assume you are enjoying the cooler weather the southerly change has brought?

Maybe you could walk up to SSK sometime? At Barmuda, opposite the police station in Australia St, from 2pm every second Saturday. We meet tomorrow, and future dates are on the website: http://shwest.typepad.com/ssk/

Looks like you're enjoying your new place! I am envious of your tidy desk.

FYI, Le Chocoreve in Stanmore (which across the road from the station on the northern side) is quite nice. My friends say the coffee is good (I don't drink coffee). We really enjoy the cakes. We bought a lemon meringue pie from there once and it was magnificent: