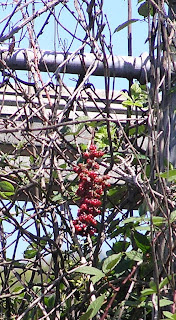 The heat has brought out more blackberries growing on the wall at the end of our yard.  Well, red blackberries, possibly also described as green.   Certainly unripe as yet and green just as raw prawns are called green.

However, in the heat we have today, mid-30° before mid-morning and hotter this afternoon, it won't be long till they are ripe and black.  They won't last long with birds around.  The rain Sydney has had over the last few weeks has triggered a major spurt in growth of the blackberry canes.  There wasn't any fruit before, green, red or black, LOL, but we are now seeing  some appear.

To me it's late for blackberries to be starting.  We used to go blackberrying on land at Wollombi, setting aside the last weekend in January to do this.  Then again, Wollombi in the Hunter valley is generally hotter than Sydney, not that I'd want it hotter than we've had.

I'd cook bucketloads into homemade jam on the fuel stove we used there.  Just delicious.  Homemade jam of any flavour tastes just so much better than commercial stuff, often oversweetened.  The aroma through the house is wonderful too.

Along the theme of vines.  No photos yet as it isn't finished and will need blocking to open the lace, but I'm working on an Ivy Vines cowl as a present for the birthday of one DIL in early March.  It's a bit hard to see the main photo in that link, a pet peeve of mine, but scroll down past the writing and others are clearer.  I saw one someone else had made.  The photo on this site would not have caught my eye.  Easy pattern but I have some gripes with the pattern.  More later when I have done another two repeats of the second pattern and blocked it.

Update:  I just checked Ailsa's blog and her second yarn club is now open.  I've already joined for this one too.
Posted by Jan at 1:23 pm

We lived in a city but with a big reserve to the side and back of our house so there were always blackberries to be picked!!Delicious jam and sponge puddings with blackberries too.
Oh it is so much easier to see on the plain coloured cowl, it's lovely!!

We grew raspberries for a couple of years but it's not cold enough even in the western sububs to get a good crop. Picking was painful with all the thorns. I did manage some raspberry jam before WM decided enough was enough and removed the canes.