There's not much point in showing pictures of more of the same.  I've now finished 4/15 of the repeats of Chart B in the Brandywine shawl.  I'm happy with it.  It's not difficult as the centre triangle increases every two rows and the outer border of lace remains the same.  It really just requires some concentration and counting.  I've also started some grapevine socks from More Sensational Knitted Socks.  I'm using some sock wool from Needlefood in New Zealand.  I'd forgotten how pleasant it is to use. 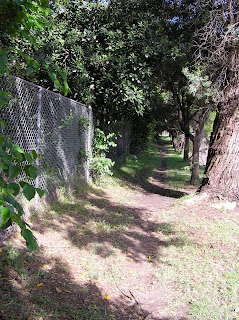 So I'm out and about this Saturday morning.  It's so far very pleasant, neither too hot nor too humid yet.  I took some photos of DIL's warrior in the backyard, made from discarded tractor parts.  However the light was so intense that not much detail could be seen.  I'll try for more this afternoon.

So I live in a small country town?  No, I'm in the inner west of Sydney.  This shady path is on our side of the road and leads like this to within approximately 100 metres of Stanmore Station which is 7-8 minutes away in a comfortable stroll.  It's lovely to stroll along and imagine myself elsewhere, although I'm very happy to be back in this area.  I've lived in the innerwest for many years now, except the last couple, although I've never lived as close to the city as this is.

The path is pleasant, the other side of the road is paved.  I do need to watch one section where there seems to be a broken drain from the trainline.  With the rain we've had, there's one section which can be quite boggy. 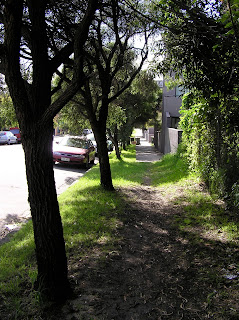 This is taken by turning around and taking the view behind me.

Our place is not far down the path, just past where the fence starts.  There are lots of trees around here and many shrubs.  When I lived  at Killara, there were trees everywhere, one of the more pleasing aspects of the area.  Before that my former home had a leafy outlook.  I was concerned about lack of greenery here but I need not have worried.  There are bushes just outside my room and while there is also the trainline, much of that is camouflaged  with greenery.  Our street has trees on both sides and fortunately they have not needed butchering to accommodate the electricity lines.

From the third floor balcony, I have a good view, up the north shore to Chatswood and can see lots of greenery dotted here and there and many old warehouses.  I can also see much of the city and its skyline. 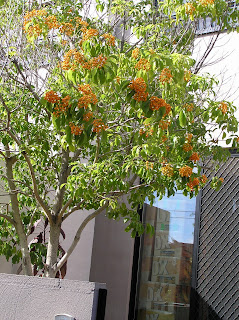 This tree is in our front yard, but not for much longer.  The yard is very small and has a large drain running through it down the hill.  Each house in the terrace has an inspection grate to the drain. The tree is far too big to let it remain near the drain.

We are not sure what this tree is but suspect it's related to the camphor laurel family, a nasty tree in a suburban block, quite unsuitable for living here.  It has grown about 1.5 metres in the rain in the few weeks we have been here.  A horticulturist could not rapidly identify it but suggested taking it out as unsuitable for the setting. Front screen door and small sunroom area can be seen.  It's still full of book boxes as we haven't decided on sites for all teh shelving yet.

Not even the birds eat the mustard yellow berries on it.  I think that's a bad sign too, as they scrounge everything they can possibly find around here.  The berries are totally untouched.

The windows behind the top of the tree are the middle floor of the three storeys we have above ground here.  For a newish building, about ten years old, we have quite high ceilings and are not cramped at all.  That's important when I mention DIL is 6' tall and son is 6'5".    They don't like feeling as if the sky is falling down! 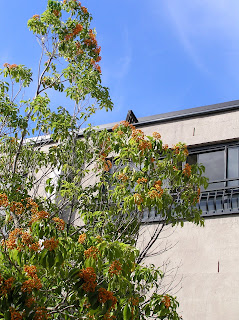 Last photo for now.  More of this tree.  Almost all of the top growth standing out above the rest of the tree has happened in the last six weeks.

Second floor windows can be seen and above them is the front wall of the quite large  private terrace opening from the third floor.  We often eat up there at night.  The end house in the row has replaced this wall with heavy glass and that's an option which DIL is considering favourably.  As it is, we can see an expansive view, but only if we are standing at the wall.  New Year's Eve fireworks are quite good from here.

There are nine houses in the row.  Ours was marketed as a town house, but really the row is a modern take on the nineteenth century terrace row, and fits in well with the old terraces around.  Town house in Sydney usually means strata title and strata levies, committees and all that entails.  These places are Torrens Tittle which means each owner has full title to the land and building.  We could paint the place something quite different to current colours, although we probably wouldn't.  The row is very well built and solid.  We hear absolutely no noise or music from any neighbours unless they are talking in the backyard. Fittings are good and taps etc were expensive, not the rubbish often seen in such developments.

This area was first gazetted in the 1890s and was called the Kingston Estate after one of the roads here.  Blocks were 4 metres wide and the end in a section was 4.5 metres and was usually a corner shop.  On my walks around, I can see how many of these shops, opening to the footpath have been renovated and turned into comfortable houses.

Just have  a look at the colour of the sky!  Very blue indeed and typical Sydney summer sky.

There are units at the end of this block which face to the street down the road.  We share the gated underground car park with them, although each place in our row has an individual, walled double garage with security door.  It's the fourth floor of the house, or the first from the bottom up!

What a lovely stroll in your neighbourhood. I can see where the tree has grown, it's become a menace!!!

Thank you for sharing your house and neighbourhood. It looks lovely (except for the Triffid growning out the front!)

Growing or groaning - perhaps both! (sorry about the spelling error - a touch typist I am not! LOL)

Sounds like you have some lovely places to walk to around the block.