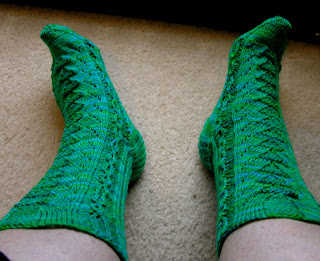 Voilà!  Shantaram finally finished.  It's been two months since this yarn was taken from the PO box, but there's been a lot happening in that time.  Moving, unpacking, settling in, heat, Christmas, grandkids staying over, disgusting colds.  Actual knitting time has not been very long really, but they are now finished.

I like the pattern and they feel good on.  Made with the first instalment of the Indian Summer Yarn Club yarn from Ailsa at Knitabulous.
I was concerned at first with the number of stitches but Ailsa assured me she thought things would be fine.  These use seventy-two stitches and I normally cast on sixty, sixty-four at the most for me.  The pattern is on the front only.  The back is ribbed in 2x2 rib basically.  This pulls them in somewhat.  They still feel loose to me, but I'm sure they'll be fine on.
The pattern is quick and easy to remember.  Eight rows only and every second row is basically plain. 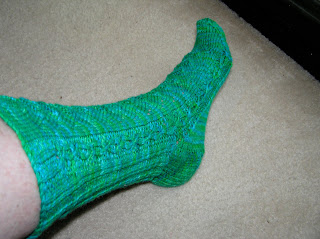 This is a picture of one of the twists which run down each side of the centre pattern  It is a bit dark here.  I've been home by myself all day and it's been a perfect day for knitting.  Lovely rain, much needed.  It was heavy here last night and it has pretty well rained all day today.  There have been a few times when it wasn't even spitting, but not many, and there have been a few downpours.  It's now early evening and the light is not fantastic for taking photos.
I decided when I joined the yarn club that i would knit the patterns supplied, as they were written.  I modify many patterns just as we modify most recipes around here.
However, these were knit as the pattern said, apart from the time when somehow I managed to swallow the two purl stitches on one side before the centre pattern!  That was somewhat costly in time to fix. I needed to go back three repeats, twenty-four rows.  Ouch! I have no idea how I managed to do that, except to say I was knitting about 3:00 am one morning when I could not sleep. 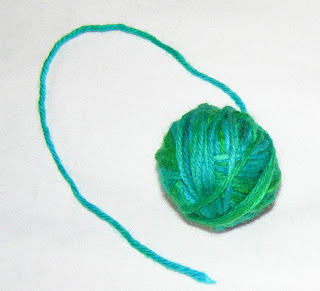 Doing things like this and making a heel flap reassured me why I do short row heels.  The fit is somewhat loose over my instep.  I like doing heel flaps and love the neat pickup I can now do along the flap.  I love making the line of decreases down the gusset.  All good, except they do not suit my feet.  One of the sock knitting big lists often has people complaining about difficulty getting a sock over a high instep.
The remedy suggested?  Lengthen the heel flap.  Now I have very flat feet. If my foot is wet, it will make an imprint of the whole foot on the bathroom floor.  Left foot that is.  The right is almost as bad.  They've been like that all my life. Short row heels are much shallower than the  other method.  I find them quicker to do than a flap and gusset and the fit is much better for me.  However, as I said, I had decided to follow the pattern exactly.  Next time I'll check the pattern and how to make any issues like the side twists fit properly and will do a short row heel.  This goes for any sock pattern.
This small, loosely wound ball is all that is left from the 100 gram ball I started with.  It's just under 2 centimetres in diameter and is quite loosely woven.  Just squeaked in!
Posted by Jan at 7:02 pm

I think they look great! I hope the fit is ok for you. I find short row heels not good for my feet - although I agree, they are much quicker to knit!

I have flat feet too - but not a high instep!

wow. I really look forward to knitting these socks in this yarn - yours look so great. Interesting thoughts on the fit. I'll have think about stuff with high insteps, as that's my problem too!

I think these are extra lovely because they are green!!! I am a terrible non-follower of patterns. I like a heel flap and gusset type sock, it fits my heel well, I have a high instep too. I just saw the Yarn Harlot's socks that knit the whole heel flap and do the gusset increases in the round. I like the sound of that!!
We had some rain on Thursday evening, it was so nice.

I like short row heels but I still have issues with holes where the heel joins the instep! :-(
So I've been using flap heels! Perhaps I'd better improve my short row heel technique!

Thanks for giving me something to think about!

Lovely socks,really like the colour!!Thank you for visiting and your advice is very helpful,Im trying to get a study routine in place now and so far Im doing ok,hopefully I may be able to to start doing an outline shortly for essay,havent even checked second unit yet,first assignment is making a visual diary and being the jack of all trades at work, Im hoping this will hold me up in that area,LOL