meet the press, no, meet the neighbours

Wow!  a week without a post.  I have been busy and out for most of the day on four days.  Business sure cuts into knitting time. 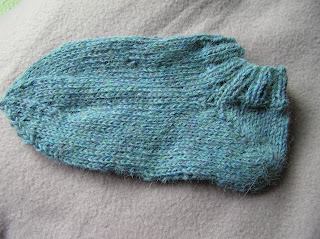 This rather strange looking sock is a bedsock for a grandson.  It's alpaca, actually much more blue/grey than this shows.  I felted it somewhat by hand to give it a bit of body and there are actually two of these finished. 8 ply alpaca from bendigo which is great for small things like scarves, socks, hats but which does not keep its shape well in bigger garments.

Andrew loves bedsocks, all the grandchildren do.  I'm not sure where that liking comes from.  Perhaps one night every winter, I put socks on to keep feet warm in bed.  They stay on an hour if they are lucky, before I take them off, usually without stirring much in my sleep. 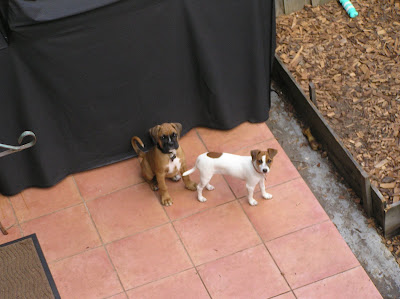 So meet the neighbours.  The town house next door is rented by a young couple.  The place is a service flat, rented by Defence Forces.  Just as well too.  Who else could afford the rent of $1000 /week?  Places that are rented here are usually sublet because there are three bedrooms, three bathrooms and a fourth toilet in each place.  This young couple has moved down from NT and seem to have everything new which opens and shuts.

A few days after they moved in, little Sascha, the Jack Russell terrier came to stay.  She's now just on five months.  She's very intelligent and very active.  She was bored and started demolishing the backyard and the garden.  So before we knew what had happened, Baxter the Boxer had joined her in the yard.  He's nine weeks old, that's all.   He's much bigger than she is already, just look at the size of those feet.  He is going to be big.  He looks very fierce here but it's all an act.  He's a softie.

I don't know if it's because he's much younger, or if he is not as intelligent as Sascha, but he's a sook.  He runs under the BBQ cover to take refuge from anything new.  He might look fierce here, but he cries like a baby.  Sascha jumps on him and he never sees it coming.  She regularly upends him into their big water bowl.  She tries to pull him around the yard by an ear or by his tail.  He cries pitifully at this.  She can't manage it, because just look at the size difference.  I really hope they are watching physical development carefully, because Sacha is older than he is. 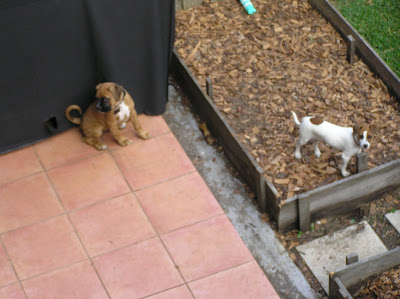 So what do the two do all day?  they chew the drip irrigation drippers, they have uprooted three shrubs.  They demolished a plaster garden gnome.  The hibiscus shrub is too big to be uprooted, it's been trimmed by sharp little teeth as far up as they can reach.  The BBQ cover has a nasty rip in it although it's new.  Toys are shredded regularly.  Today two big holes have been dug in the garden and mess has been shot al over the lawn.

The photo was taken from my bedroom with some use of zoom.

In other news, I ordered some of the Melody from Bendigo, cashmere, merino and microfibre.  It came today.  Five balls of navy and six of forest green.  100 metres in each 50 gm ball which costs $4.  I have lots of shawls waiting my attention.  This stuff is lovely.  Decisions, decisions.
Posted by Jan at 5:46 am

Sascha and Baxter gave me such a good laugh. How funny they are and the look of innocence on their faces!!!
Oh, Melody. It sounded nice and I am glad to hear it IS!!!

Ooo, puppies. I hope they don't keep you awake whining and/or barking!

The new Melody sounds lovely - can't wait to see waht you think of it after you've knitted with it.