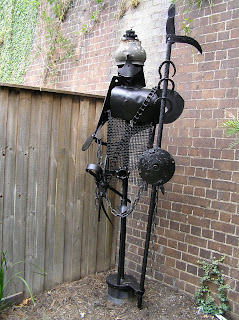 I tried last week to take a photo of this warrior.  However the light was very strong and the camera did not cope too well, obliterating his lower half.

Son and DIL bought him many years ago on a trip to the Hunter Valley.  He's made from old tractor parts and bits of farm implements and other metal pieces found on a farm.

His head is an inverted old copper bowl which is why it's not black.  All the other parts are iron and need fairly regular treatment for rust.  DIL painted this with special paint a couple of weeks ago.

There are horse shoes, parts of a plough, brake drums from an old car, tines from a cultivator and more.

He's very heavy and stands attached to a big old metal wheel  from a truck.  That's on a lump of concrete.  They intend to use some cement and dig a hole to hold him securely. 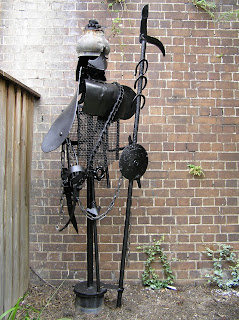 He spent a lot of time at Killara on his nose on the ground.  The statue is top heavy and the winds there blew it over several times.  We thought things would be different here with the wall sheltering us from winds from the south, but there was such an eddy of wind one day this side of the railway wall that he blew over again.  He's been secured now as constant falls have not been good for his welded joints, just as the humidity has played havoc with the joints in my hands and feet lately.

He's certainly a talking point for guests who haven't seen him before.
Posted by Jan at 8:06 am

I love your warrior, he looks like he has been to The Crusades!!! It is a bit funny that he has to be secured, though I wouldn't want him falling on me!! Hope your joints are feeling better soon. Spring and Autumn seem to be the worst times her for joints at our house!!

That is an amazing piece of sculpture. I'm glad your DIL is not afraid of painting him and keeping him secure against rust and high winds.

It has been incredibly humid, hasn't it? My joints are okay but it has played havoc with my sinuses.