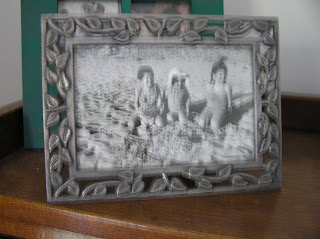 This is a photo of a photo, a fairly old photo.  It was taken a l-o-o-o-ng time ago on the beach at Bundeena in Sydney.

No matter where I put the photo to take another shot, there were reflections which make the image fuzzy.

The little girl in the middle is me, probably just turned three.  The girls on either side are unknown.  they were playing on the beach with me.  The one on the right has plaits and what seems to be a woollen swimming costume.  The little girl on the left has an apparently knitted beret.  I have a floppy hat which is firmly tied in a bow under my chin.

I'm often asked if I'm from England.  I don't think my accent is English at all, even when I listen to tapes of talks I have given.  However, I've been asked many times.  I have no idea where the girls came from, but as I said, I'm probably not long three years old here.  One of the girls told my parents, "Don't she speak just  luverly!"  Shades of Eliza Dolittle!

My mother was sunsmart long before it was fashionable to be sunsmart.  Her mum, my grandmother, hated tanned skin and would promise me extra pocket money when we went on our beach holiday if I stayed lily white.  I have a big floppy hat and a long sleeved top on here.  We spent all our holidays at Pearl Beach out of Sydney for very many years.  Mum went through many bottles of lotion to prevent us being sunburnt and we had zinc cream on our noses and lips.  The very worst humiliation in our minds was that in the afternoon when the sun was at its hottest, we had to wear the shirts from the previous winter's school uniform over the top of our swimming costumes.  I hated them.  They felt terrible when wet and were flippy flappy against our skin.  Still, we didn't get burnt.
Posted by Jan at 7:21 pm

I like Bundeena a lot. Staying in a B&B on Gunyah Beach for a week was fantastic.

Your mum and grandmum were right though it didn't seem so at the time I'm sure! The winter shirts seemed extreme but they obviously worked.

I got burnt so many times on our annual holidays and even as a young adult I hadn't properly learnt my lesson. As a mum, I simply kept my blonde, blue-eyed DD out of the sun as much as possible in the afternoons!

A lady from the UK would not be dissuaded the other day, from thinking I was British. Despite my assurances, she wasn't having any of that, thank you very much.
Ah, memories of days at the beach. We had to wear hat and T-shirt and sun screen. I think I was only ever sunburned once. We didn't have to wear last year's school shirt!!!

My mother and aunt used to sniff, and declare that 'tanning was for leather' - and let's face it skin that has been tanned and tanned every season for forty or fifty years, well what does it look like?