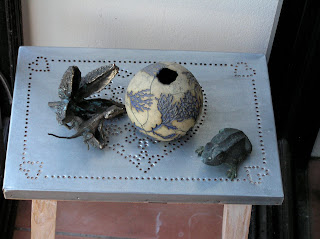 I had the camera out for something else when I spied these bronze cast  pieces.  Not terribly valuable, but gifts so I value them.  The lizard in the gumnut used to rest in a potplant.  Not much around here like that now where I can easily see them, so I've brought it inside.

The frog spent years in my goldfish pond sitting  on an exposed rock.  My husband never liked it so i made sure to collect it.  It's quite heavy.  We had real live frogs in the pond occasionally.  Apparently in suburbia, frogs can travel quite long distances when they sense a pond around.

The small posy vase I've had for ages and was also a gift.  I think it's seaweed which has been pressed into the wet clay when it was made.

The little table is not really me.  It's made of cheap pine with the punched top and was another gift.  Nothing  wrong with it, just not my style.  In fact, I thought it had been donated  elsewhere when we moved.  It's come in useful now.  It sits in the airlock part of my room between the two sets of doors.  If the donor ever gets to the room, it will be readily seen.  Not that that is the reason, I would happily have given it away.
Posted by Jan at 6:51 am

We have frogs occasionally too - they are incredibly noisy after the rain!

The table is a nice setting for those objects in that the size and the colour work well. Perhaps if the legs were painted the same colour as the top it would be less intrusive? (or maybe I should mind my own business LOL)

No problems, Lynne. It probably would help but I'm not sure if I'd get around to it. As it is, the table fits neatly across the airlock partition with just a bit of space on either side.

I think the table is a good match for the things which sit upon it, so it's OK! I have one of those posy vases, mine has gumnuts and leaves on it, and it's glazed.
Frogs live where we walk and I love listening to them make their noises!! Frogs are a sign of a healthy ecosystem.