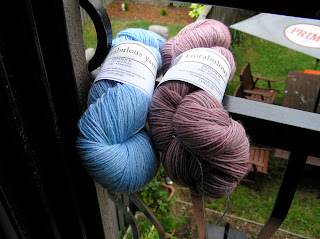 The Raspberry Ripple oops, Heirloom Jigsaw pink sock wool was very hard on the eyes for me to knit.  Very definite stripes indeed and very, very pink.  Now one granddaughter seems to have grown out of the pink stage, the next is moving past it and the third still likes pink.

However the  middle one asked for more socks when I was last out there.  She likes the little tennis sock style and when the weather was cooler last week, wore a pair of commercial socks to bed.  It really was nowhere near cold enough to do this, but her dad says she likes bedsocks so I decided to make another pair.

Thankfully most of the Heirloom wool is now finished.  I didn't mind the feel of the wool, but boy oh boy, those stripes were bright.  When I saw these two lovely colours at Knitabulous' shop, I quickly bought one of each colour.  The wool is called Softsock and is superwash although as Ailsa points out, handwash is better.  The pink is lovely muted soft tones and I'm looking forward to knitting it.  The blue would suit anyone.  It's lovely too. 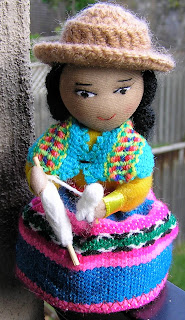 I was in Summer Hill, a Sydney suburb, this morning to have coffee with a friend from the far North Coast of NSW.  After coffee, I was walking back towards the station when I saw a sign saying something about lifting women from poverty.

I went over.  The shop is a Fair Trade place, selling somewhat similar articles as Oxfam does.  Lots and lots of handcrafts.  Some truly beautiful stuff there.  As I've been perusing my book of Little Andean Knits, I was thrilled to find this small Peruvian woman.  Look, she even has a spindle and some roving.  I bought her on the spot.  She's handmade, her vest is knitted and look at those colours  which are fairly true to life. 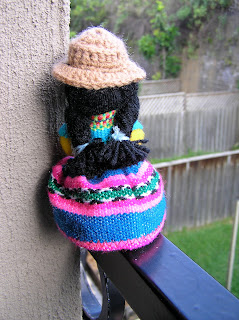 She stands 11 cm high, not big at all, and cost me $10 with the money going to a good cause.  I really would have love the big black cape with the alpaca collar but that was $210 and I've just bought a new computer. Still, every little helps.  They also had lots of tiny llama finger puppets and other toys.  Some really good looking jewellery which called  my name too for a small price.  However, the assistant doubted if the findings on the jewellery were silver, and I wasn't going to risk sore ears, so I left them there.

She even has authentic thick black plaits tied together at the back.  The skirt is stuffed and she could probably be a pincushion, although perhaps the stuffing is just to hold out her skirts.  The book mentioned above has photos of women almost identical to this little doll.  It also shows young boys knitting with the yarn feeding from around their neck and pictures of elderly men knitting.  How would you feel knitting with bicycle spokes instead of fancy Addis or Knitpicks with their flexible cables?  Apparently many needles were once spokes from a discarded wheel.
Posted by Jan at 5:49 pm

Do you know, in the half-century-plus I've lived in Sydney, I've never been to Summer Hill? I've passed through it countless times by train or car but never actually stopped there. But you're tempting me to change my ways!