That was what the man staying here for a while said of a game from his team at the weekend.

Unfortunately, we were robbed.  On Friday evening while my son and I were in the house, someone slit the gauze screen and opened the door from the inside.   The boarder  later told us that he'd come home and found the door open, so had shut it.  Next morning all was open again.  That must mean that the thief was in here when he came home.  Very nasty.  It appears cash was the target.  An iPod and an iPhone were in full view but not touched.

My handbag was taken.  It had about $130-150 in my wallet, all useful cards, some customer loyalty cards and my keys with an almost new lovely key ring I bought in Canberra a few weeks ago.  Fortunately I had checked bank balance on Friday so could tell nothing had gone when I rang to cancel card early on Saturday.  I've ordered replacement medicare and centrelink cards.  Can't think of anything else desperate in my bag, which was fairly new, an expensive present  from one son. Wallet was also expensive and I'm fussy about such things.  I like a certain style and it often takes me several weeks to find what I want.

Boarder lost wallet.  Son had a bowl with lots of one and two dollar coins in it, probably several hundred dollars.  There was also his custom designed and made platinum wedding ring and several other silver rings bought by DIL for him.  She was away for weekend so lost  nothing.  Sons keys, for house, car, work, church all went.  None of the keys, his or mine, had any identification apart from the obvious one being a car key.  All Saturday night, I was worried they would come back for the car.

He rang locksmith who changed all the locks here only a few weeks ago.  He had a busy day and didn't get here till nearly 6:00 pm.  Job cost almost twice as much as before.  Saturday work.  Son hasn't claimed on insurance.  There would be an excess around the same amount as the locksmith bill.  He has five or six properties all insured by the same firm and said premiums on all would rise if he made a claim.  Stinky system! 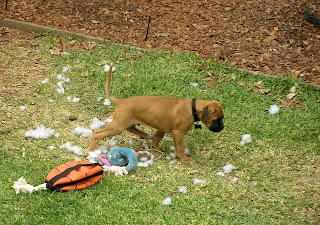 I think the event took its toll last night and I didn't fall asleep till 4:00 am this morning and was awake again at 7.  My brain is fuzzy.  I've been doing a shawl with some of the Bendigo Melody which is beautiful to use.  Stitch definition is good.  However, I won't do anything lacy today.  I think that's asking for trouble.

On a brighter note here is more from the puppies next door.  They were by themselves in the yard all day so made most of it.  More holes in the garden were dug.  They finished the demolition of the drip watering system and pulled up the plastic pipes.  The mess here came from a large rag doll which they murdered.  There was more stuffing spread around the yard, I've cropped the photo.  One of the holes they dug can just  be seen at right hand edge of photo.  See their deflated toy as well?  More damage by sharp puppy teeth.  They are bored and were left by themselves most of this weekend as well as while their owners were at work.
Posted by Jan at 1:02 pm

Oh I'm really sorry you were robbed, that's awful - and so brazen too.

And those puppies - I do feel sorry for them being home alone so much, no wonder they are so destructive.

Oh what horrid news, and how awful that someone was in your house. Glad that everyone is safe.
Poor little puppies, they need lots of attention when they are small so you can 'socialise' the to your way of living. Here's Lorelai Gilmore now having a pat!!!

Oh dear, that is dreadful news. I'm glad that you are all safe; thank God.

I'm so sorry to hear about the robbery.
I went outside yesterday and noted that some of my gardening tools had been taken from our backyard. I know it's not the same scale of theft as yours, but I do know how you feel - shaken.

I agree with you, Melinda. It's the knowledge that someone else has been there, has perhaps even been casing the place that makes it bad.

So sorry about the upset. I can't imagine how I would feel! It's really terrible the way insurance companies "get"you, isn't it? There's always an out despite all the money they collect all year ...

Poor dogs. We have people living behind us who don't seem to do much with their dogs, either. Why have them if you don't spend time with them?