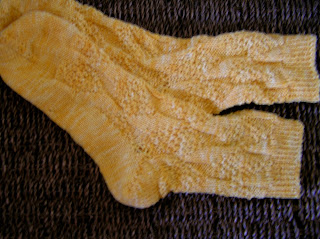 I finished these a few minutes ago and grafted the toe.  I really enjoyed this pattern  from Ailsa.  It was easy and quick as the pattern rows sped by.  I had put them aside for a few days to do the shawl shown below but it took only a little while to do the last few pattern rows, then the toe.
I'm considering doing the pattern again on some grandchildren socks.  It's a 12 stitch repeat so I could do it on the leg and make the foot plain, unless I chopped the pattern short which I'm reluctant to do.
Good news about my little granddaughter who saw the oncologist this morning.  The family doctor had told her parents that things such as she had which were on the sole of the foot were always malignant.  I think he should have been less hasty in his speaking like this.
It was a very deep seated blood blister possibly caused by landing heavily on a stone.  There was no lump to be felt, it was so deep and she had no pain.  He took off top layer, she thought he was tickling her foot and scraped it out to prove his diagnosis.  I always felt she would be fine, but nevertheless, it's a relief to hear what it was .
Posted by Jan at 2:12 pm

Oh that is such good news about your grand daughter!!!
Gorgeous socks, sometimes I don't do the pattern on the foot, but this looks very good!!

Excellent news about your granddaughter - what a relief that must be.