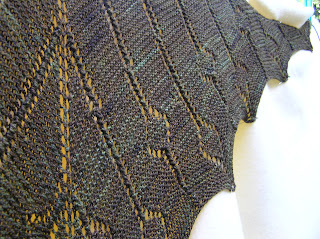 I decided I'd make another shawl with the beautiful sockwool, colour Sacred Forest, from Ailsa, Knitabulous.  This wool is the first instalment in her second yarn club, accent this time on Japan.
As I wasn't sure of time frame involved, I've concentrated on this over the last three days.  It's to be a gift to  a friend in Canberra.  I had asked this friend for some patterns and hints as I wanted to make something another friend needed.  In return, she has offered to make all items and refuses any payment for them.  So friend and I decided to give her something.  An almost simultaneous decision, by the way.  He asked for ideas and when I said that friend who is originally from Townsville, hates the winter in Canberra, the decision was easy.  We had thought of book, gift vouchers, dinner voucher and other things. 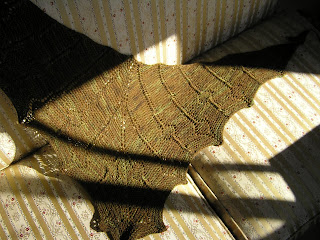 However, Ailsa's lovely wool has turned into a small shawl, large scarf.  It's soft and cosy but very difficult to photograph.  The top photo is of dry shawl still pinned to blocking blanket but now pegged on the line.  It's very hard to see the subtle colour changes, although the actual pattern cane easily be seen.  Sometime after I made the first Milkweed shawl, I found a photo of the plant.  The shawl pattern is very true to the form of the plant.
The second photo is on lounge in sunroom opening off Dil's and son's room.  Again, I found it difficult to show colour changes.
With this now done, I can concentrate on finishing the Mountain Fold socks, also from Ailsa.  I'm very nearly down to the  toe decreases in the second sock.  Next project after that will probably be some wristwarmers for a friend in chilly Mallacoota.

I enlarged the photo and can see lots of shades and tints of blue in what appears to be slate coloured ground. It looks very interesting; is it the real colour?

I enlarged the second photo and realised that it's tones of green and brown - which makes sense given the name of the colourway!

Isn't it annoying when one can't duplicate with a camera and computer monitor the colours the eye sees? I used to spend hours trying to get it right but have just about given up!

Wow, finished already?? And it is beautiful, the colours in the wool are so lovely. What a kind knitter you are!!!

Wow, that took you hardly any time at all! It looks great and is sure to be a welcome gift.