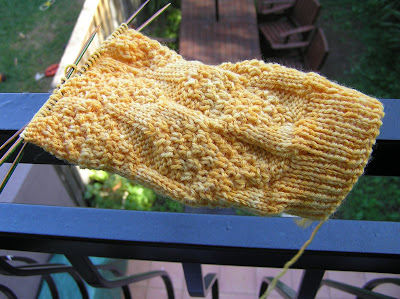 Ailsa released a new sock pattern called Mountain Fold after an origami fold.  It will be  a couple of days before I can get to the PO box to hopefully pick up the first instalment of her next yarn club, Black Nights of Japan, I think it's called.  Haven't checked that so I could well have it wrong.  I picked up some sock wool from Michelle at Needlefood.  The colour is orange butter cake.  It shows the pattern well.

The pattern requires some accurate counting till the sequence is established.  Notice I said accurate.  Draw your own conclusions from that!  It's actually an easy pattern.  There are twenty two pattern rows each repeated a second time.  You'd see it better if it were flatter but I was getting the best light I could after 4:00 pm and it's resting on the top bar of the railing outside my doors.

The pattern is enticing.  It drew me in.  "Just another two rows" was  similar to "one more chapter" as I used to  say to my parents when my light should have been out.  I'm down to the heel and will probably do a short row heel as that suits my feet better than a heel flap.

I think autumn may have decided to finally arrive.  Mornings and evenings have been cool and woolly socks seem attractive to my toes this evening.  I rarely wear shoes inside here.

Are they Ailsa'a gorgeous green socks?? The same pattern?? Yours are lovely, they look buttery and soft and I can see the shapes forming.
Short row heels don't fit my foot at all, isn't it good there are different heels??

The pattern is beautiful in that yarn.