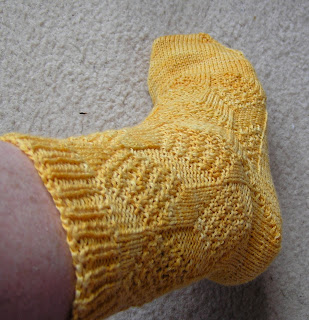 One down, one to go.  This lovely pattern is from Ailsa.  She says it's based on an origami fold, nothing to do with mountains at all.  However, the folds do remind me of the folds in the Great Dividing Range, particularly further south from Sydney around Picton sort of area.  The Blue Mountains west of Sydney are not mountains at all but the remains of an upthrust plateau.  The Dividing Range has folds of mountains, one on top of the other.

The yarn is sockwool from Needlefood in NZ.  The colour is orange butter cake.  Done on KP 2.5 Harmony needles.  I did a short row heel because I really do find them more comfortable on my low arch, flat instep feet.  I preferred the look of Ailsa's gusset and heel flap, their triangular gusset complemented the triangular sections in the pattern, but  they will go on my feet and I know what suits them. 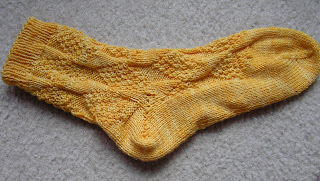 We had a lovely family picnic yesterday at Pearl Beach on the central coast.  It was to mark a year since Mum's death.  Her 90th birthday would have been just a few days ago.  All the grandchildren swam for quite a long time.  The water  was pleasant but there was a cool breeze blowing over the beach.

I've known and loved Pearl Beach since I was about six.  I've spent many happy holidays there.  It's changed, in many ways not to my liking, but it's still beautiful.  We took all the children around the rocks past the baths in the afternoon.  I think I know practically every nook and cranny and rockpool there and I've actually walked and climbed all the way to Patonga around the water.  They had a marvellous time discovering all sorts of creatures and seaweeds in the pools.  The tide was quite low, so they could get down to the edge of the rock platform.  Four year old Finn thought he was very brave.  He touched a crab in a pool.  He was sure it was alive, but it was upside  down and floating, so I doubt it!  Someone turned a starfish upside down and they watched fascinated as it righted itself.

On a not so happy note was the  news that my son took Miss Seven t the doctor because she appeared to have a wart on her foot.  They have a specialist appointment in a a week or so, but the probability is that it's something very much more sinister than a wart.  The good news is that treatment is usually successful, but it's very worrying, nevertheless.
Posted by Jan at 1:24 pm

Your sock looks great and sounds like you had a lovely day yesterday - although very sorry to hear about your granddaughter, hope things go well.

Glad your day at Pearl Beach went well. Sounds like everyone had a wonderful time.

My thoughts and prayers are with you, your son and his daughter (and the rest of the family).

When I was really small, we would come home from my nan's house early so I could do origami with Robert Harbin's show on the ABC. I loved all the paper folding and there are mountain and valley folds!! The socks look beautiful, the pattern is great!!
Sounds like a perfect day at the beach.
Oh I hope everything goes well with your grand-daughter's foot. We shall be thinging happy thoughts for you all.

oh, nice! the pattern and yarn combo is very lovely :)