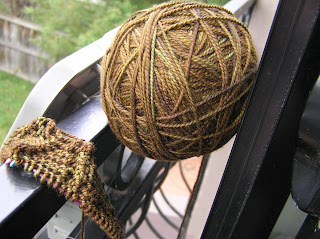 This beautiful wool is Ailsa's first offering in her second yarn club.  In real life, it's a little darker than shows here. The first club had an Indian theme.  This one has a Japanese theme.  The wool is lovely, similar to the yarn I used for her February Baby Sweater test knit a couple of weeks ago.  There's 115 gm in it, although when I weighed the ball after winding, the scales consistently said 127 gm.

The colours are beautifully blended.  She's called it Sacred Forest.  There are shades of brown, dark brown, bronze and a  couple of muted greens.  I love it.

I'm going to be using it for a Milkweed shawl, my second.  A friend of mine is doing some work for another friend.  Quite a lot of time and effort involved in an area of work for which she would normally be paid.  She totally refuses any payment absolutely.  So this lovely yarn will help keep her neck warm in the Canberra winter.  I'll be knitting much of today on this so my friend can see it when he calls after supervising St John Ambulance volunteers at the Anzac Day March.  It won't be finished but will be well on the way.  I did the first chart last night.  She comes from North Queensland and hates Canberra in wintertime, so this may help.
Posted by Jan at 8:21 am

I ahve been seeing this colour around the internet!!! It looks quite Japanese and it will make a lovely shawl!!

How thoughtful of you. I hope both friends appreciate it.