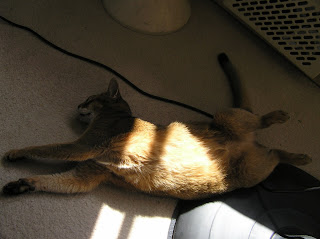 Here's my Saturday camera.  Well, it's Monday today so it's a bit late, but the photo was taken on Saturday. That must count for some brownie points, I guess?

The weather is finally beginning to cool down ever so slightly and the nights have been better for sleeping.  Here's little Sweetpea taking advantage of some sunshine in the small sunroom off son's and DIL's bedroom.  It's a bit hard to see because of the play of light and shade, but she's actually quite twisted like a corkscrew.  The bit of her in the sunny patch is at right angles to her head so she can get the sun on her tummy.  Then there's more of a twist to the legs.  Add in the arch like a ballerina and the fact that she's also raised by lying on the base of the fan, and she looks very uncomfortable to me.  However both DIL and I took several photos and she didn't stir, even at the click of the camera.  That's unusual for her, so she was very soundly asleep.

It's the Easter holiday weekend and we've spent it fairly quietly. Church on Friday and then yesterday again and I had lunch at church afterwards.  There are quite a few different nationalities in the congregation so there was a lot of variety in the foods brought.  I tasted a lot, usually just about a teaspoonful of each.  Most, especially the homecooked Thai and Indian dishes were really delicious, much better than commercial stuff.  Mind you, it was a bit difficult to work out what some were.  There were labels but they weren't a lot of help when the cook's English was scratchy.  I took the easy way out.  As I'm new there, have been there since Christmas, I didn't know what people would bring.  I baked a chicken and then took it apart when cold and served it on a greek salad.  It went too and there was a great variety of food.

As far as knitting goes, I've had a bit of a mixed week.  The Bendigo Melody, very similar to Heirloom cashmino is beautiful to work with and the stitch definition is great.  However, I've been reminded twice of the 60s song When will they ever learn?  The answer is blowing in the wind.

See tags telling of frustration and frogging.  Twice I was working with the Melody on a shawl.  Twice I've had to pick back several rows, stitch by stitch.  I have no idea what happened the first time except that I made a mistake and then somehow fudged a correction.  I didn't even see it till I spread the shawl out for a look and there it was, about ten rows down, standing out like a sore thumb.  So that had to come out.

The second was after a great day working on it.  I continued in the early evening as it became dark, even though I had the light on.  I was tired but kept going although my brain was saying to stop.  That was a recipe for disaster.  On shawls and other lacy things, I use stitch markers, often lots of them.  I use a distinctively different stitch marker as the first marker for the right side rows.  I was going along on the shawl and congratulating myself on the progress when I realised that somehow I had managed to duplicate a WS row and was now working the pattern on the back of the shawl.  I was disgusted.  I picked back two rows and put it aside.  In the daylight I could see I need to unpick another four rows to get back to doing it properly.  So frogging and frustration.

I've started a slip stitch hat for #2 son.  I have a birthday present for his wife and some knitted things for each of the children.  I thought I'd better do something for him too.  It's easy but slow and I'm using 3.5 needles on 8 ply wool so fabric is very sturdy.  Grey and black which look good together.
Posted by Jan at 3:49 pm

Sounds like you had a lovely lunch at church. I love trying foods from different cultures and that is the best way!

We had a barbecue but the wnd was quite cool so it wasn't really pleasant sitting in the screened enclosuse on the south side of the house!

We've had DD and GS#1 here all weekend; SIL has come and gone and come again; he had to work on Saturday. It was lovely to spend so much time with them. DD and I are working on a new patchwork project - a modern sampler quilt!

Sweatpea is a twisty turny cat!! Cats are like that though and they love the Sun too.
Oh your knitting is misbehaving, I try to push on when I am tired too, and then I usually make a mistake. Hope you an knit back to where you were quickly!!

I'm wondering if there's actually any difference between the BWM and the Heirloom - after all it's the same company making both.