Monday evening update  I said little about the jacket before because another person was involved.  However, she's given me the all clear, so here's more detail.

Many of you will know Ailsa from Knitabulous.  She does beautiful knitting and also sells some lovely yarns in amazing colours.  I was a member of her yarn club which finished a few weeks ago and signed up immediately the next one opened.  The yarn is beautiful and Ailsa  works with high standards of ethics.

A few weeks ago she wrote to me asking if I would test knit some new yarn for her.  Sock yarn.  She asked me to make the Baby Sweater by Elizabeth Zimmermann for her.  This is the result.  Keep an eye on Ailsa's blog and Etsy shop for the release of this yarn. Probably early May.  It's great and for more than socks.  I did the jacket on 3.5 mm but think the yarn would still be lovely knitted on much smaller needles for socks.  For a start, there are 115 gm in the skein, over 400 metres, lots for socks.  I used the original KnitPick metal circular needles and the yarn just glided along.  I found it almost impossible to split, even when I wasn't watching well.  The pattern shows nicely.  It's consistently spun and  plied.  I've used too many expensive wools which in spots are thick and thin, something I might spin. One wool I used recently had hard little lumps still firmly attached to the yarn.  A shame I wasn't knitting nupps in that pattern, they were there ready made.  Nothing like that in this wool at all.

I would envy any baby dressed in something from this yarn.  I was knitting one of the cool mornings in the last week.  My fingers were luxuriating in the softness, the squishiness and cosiness of the garment. As I said to Ailsa, it was like comfort food, very addictive and totally pleasant.

So this update expands on the who, what, when where and why comment I made at the end of the post. 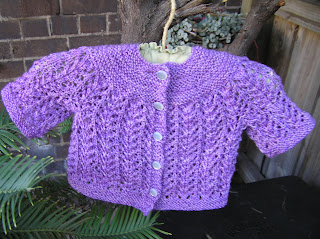 So here's what I've been working on for the last week.  It's Elizabeth Zimmerman's February Baby Sweater from The Knitters Almanac.  I've done two adult jackets, Liesl, by Ysolda Teague which is  done on similar percentage numbers, but somehow the baby version has passed me by.  I was asked to do this a few weeks ago and the yarn arrived early in the week.

The bottom jacket is perhaps somewhat more accurate in colour.  I've photographed several things in similar shades in the last 18 months or so and it's always been difficult to get an accurate reproduction.
This is hot off the needles, no blocking done yet in any shape or form.  The buttons were part of the large collection given me by a friend from his mother who was a dressmaker.  Three were some really wonderful vintage glass buttons which would have looked fantastic on this.  Unfortunately most of the designs had only three buttons. One had four, but I'd made five buttonholes.  These buttons are at least twenty years old.  Friend's mum died twelve years ago and had Alzheimers disease for at least twelve years before that. 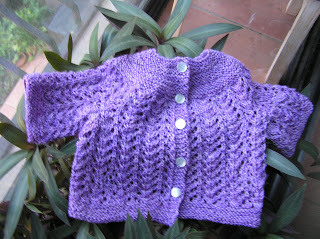 You know the instructions to read through the pattern first?  Well, I did that.  One part did not make an impression on me at first.  This is possibly due to the way the pattern, or instructions rather, were written.  It's not really a pattern, more a series of ideas strung together.  It speaks of the yoke being done and then mentions the buttonholes.  The picture in the book clearly shows buttons from the top of the yoke.  As I went to do my first buttonhole which was after I'd finished the yoke, the penny dropped.  I had to rip it all back and start again.  I need to remind myself to read the pattern with some degree of comprehension, understanding just what the pattern really means.
More details on who, what, where, when and why to follow later.

You're a better man than me Gunga-Din! I have made two FBS; forgot the buttonholes both times! Haven't yet decided what to do but may use my mother's trick: sew on the buttons then put a knitting meedle through the knitting on the oposite band and wiggle like crazy! When she knitted for us as children, she did all the buttonholes this way and they all worked and survived the wear and tear that children give! (Just a thought)

PS It's a gorgeous colour.

Of course, it may be easier if I use a needle rather than a meedle!

if ever there was a pattern where reading ahead was necessary, this is one! The buttonhole issue is oft discussed.

It's adorable isn't it? such a fun knit. I'm sentimental about it - it was the first thing I made for my niece.

It's looking gorgeous, and so fast! Can't wait to see it in the yarn..

It looks lovely! Such a sweet pattern.

It looks lovely. And the colour is gorgeous. I purchased the knitters almanac 2 years ago, but am yet to knit a FBS ... I think I might have to now.

And then, in the end, there it is--gorgeous!

Your FBS is just gorgeous! I love the color too.