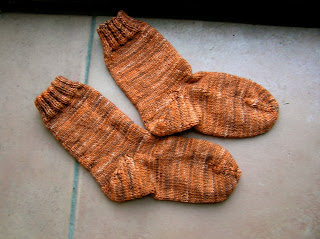 Here's some more of Ailsa's new sock wool.  I had mentioned to her how hard it was to find orange tones in sock wool for children.   When she dyed this, she remembered my comment and emailed me asking if I would like it.  It's the same yarn as the cute February Baby sweater of a few posts down.  The colour is  "baby leopard."  It looks fairly accurate here.

I took it to grandson's place yesterday.  He loved them.  Orange has been his favourite colour for a couple  of years now.  He's four and still a very concrete thinker.  He told me several times that they were SOCKS, not baby leopards!  His cousin is seven.  These are the same length as I made her latest pair, but I cast on another six stitches as he has a very broad foot.  They fit nicely.  It was chilly up there this morning, more than chilly actually.  He dressed himself in shortsleeved top, shorts, his new socks and gum boots.

I've been working on a pair of fingerless gloves in Bendigo's Mystique.  These will be for a friend who's lived most of her life in Queensland.  She's now in Mallacoota on the Victorian coast  where it can be very cold in winter.  I made her a  scarf from Welsh mohair before  she went, and thought gloves would be good too.

I worked out the pattern and made one up.  It was really a bit sloppy.  I thought of various fixes for it.  Then I realised none of them was practical.  After all, who can tie a bow on the back of a wrist with one hand?  I ripped it all back and started again with fewer stitches.  It's worked well but I need to do the second glove.  A lacy insert goes up the centre with moss stitch on either side.  I worked out a gusset below the thumb, then picked up stitches for thumb later and knit it.   A few decreases in the last two rows pulls edge in nicely and I finished it with a band of moss stitch around the hand.  It feels very warm, so I hope they fit.

As I said, it was  quite cool this morning, not before time.  When I changed the sheets on my bed, I also found my enormous pi blanket which I made in 12 ply last year.  It covers this futon double bed well, so I've kept it handy.
Posted by Jan at 7:53 pm

Such sweet and lovely Baby Leopard socks!! What a kind dyeing thought for you!! I love that your grandson has such determined colour ideas!!
It is still warmish here, but cool enough for a hot water bottle!!

Lovely socks - as soon as I saw them I thought they must be for orange-loving grandson!

The socks look great and my son used to love orange when he was little too. I quite like it in certain tones but it doesnt like my skin tone, too pale Im afraid.