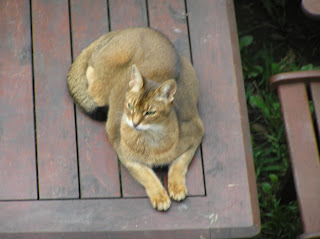 Herewith one grumpy, sulking twelve year old Sweetpea refusing to look at me on my first floor balcony.  She's been shut outside for about an hour and her face shows her displeasure.  Madam is not amused.  She is refusing to acknowledge my presence.  There's no wind, it's quite mild.  If we don't shut her out in the morning after her breakfast , we often find a pile she's chucked in some place inside.

This isn't a total cure.  She seems able to produce something to express her displeasure at will.  Always near the belongings of the person who has currently offended her.  However, it works most days.  The airlock system we have here now works a dream.  When I come down in the morning, I put her breakfast in the bowl which is between the two outside doors.  As she eats, I open the outer glass door and screen door and quietly slide the inner glass door shut.  She knows this is going to happen but pretends to get a surprise every day.

Yesterday I heard DIL whistling in the third floor office.  Sweetpea usually responds to being whistled like a dog.  Whistling went on and on.  She had used one of the chairs on the top balcony to jump onto the railing and then into next door's balcony.   She eventually decided to grace us  with her presence, but because DIL spoke to her as she jumped back, she promptly did it all again and took her own sweet time coming back.  We've had to move the table and chairs well away from the side walls of the balcony.  A few years ago, she would have done it without any assistance from chairs, but she old now and the pelvis which was broken in an attack by dogs 18 months ago has healed, but is partially out of alignment.  The vet did the best he could, but so much damage was done that it's amazing she pulled through at all.  It's certainly affected her agility.  As a kitten she once jumped the fence at son's place, escaped and then came back with an enormous king prawn, apparently lifted from a bowl on someone's BBQ.  Several times!  We never did find who was several king prawns short.

As they say, "dogs have family, cats have servants!" LOL