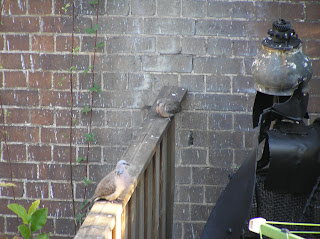 One thing we miss about Killara is the birds.  We don't miss the  hundreds of mynahs, both native and Indian which used to harass us and the cat.  We do  miss the kookaburras and their last call in the summer evenings about 9:00 pm.  We miss the magpies and currawongs and the lorikeets and others of the same species. 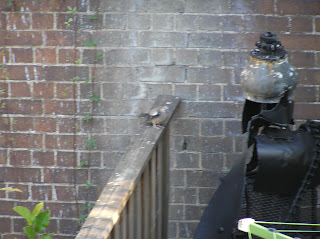 While there are quite a few trees around here including native trees, there are nowhere near as many birds.  We have some mynahs.  There were five which used to sit on the dividing fence.  There are now seven.  They are very opportunistic.  They sit and watch the puppies next door.  When the pups are otherwise occupied, the birds swoop on the dried food left for the dogs.  We've even had them come into the airlock here for the cat food when the screen door has been left open for her to get out.

I've heard the big sulphur crested cockatoos overhead and seen tiny wrens in the vegetation next to the train line.  Some lorikeets eat the berries on the street trees.

I've not seen any pigeons but we do have doves.  The pictures are of a baby dove.  It was late in the afternoon when I saw it on the fence, so pictures are blurry.  That was a few days ago.  I saw it again today with its mother, (guessing here).  Today was cold and wet and it was sitting on the fence, quite miserable with fluffed up feathers.  In the lower picture it's sitting near the edge of the fence wondering if it should fly.  Mum had flown to the fence on the other side of the yard.  It did eventually take off and land somewhat awkwardly on the fence next to her.

There is also another hormonally challenged dove which has been building a nest in the blackberries hanging down from the train line since we moved here, just before Christmas.  It continually brings twigs and grass for the nest, but is frightened of the vegetation moving.  Sometimes it actually lands, other times it's scared away when the breeze from a passing train makes the blackberries move and sway.
Posted by Jan at 6:08 am

My, you are very observant! I would rarely notice little details like that!

We have lots of birds - the lorikeets that came down from the mountains in the fires of 2001 and never left, a huge flock of corellas, lots of crows, magpies and currawongs. Occasionally we hear kookaburras or see pelicans flying overhead; rarely, but most exciting, I see eagles!

We have doves at our house and at the dam lots of black and white cockatoos and kookaburras and lorikeets too!! They can be Very Noisy when they are in big flocks.