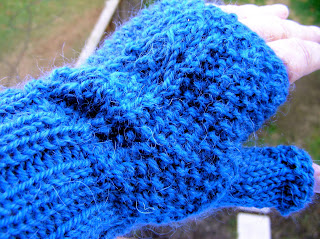 These gloves are on their way to Mallacoota in Victoria.  A friend of mine moved there in January after years in Queensland.  She has been feeling the cold very much with night temperatures around zero, sometimes below.  She has fallen in love with the place with its beautiful mountains, National Parks and beaches, but there are few shops, the closest town is 90 minutes drive away.  So I made these gloves for her.

They are made from Bendigo Mystique, the colour Britannia.  The photo is actually nothing like the colour  in reality.  It's much darker and more sombre a colour.  I used this because she does a lot of driving, she's a minister and it would take her about six or seven hours to  drive  around the perimeter of her parish.  The dark colour won't look as dirty as something light.  I also used this yarn as it's very warm , an 8 ply, of wool, mohair and alpaca.

The cuffs have been made quite long, about 14 cm to tuck under her sleeves without a gap between sleeve and edge of cuff.  It's almost impossible to see but there's a small lacy panel up the centre of the back of the glove and then a panel of moss stitch on either side.  I made a gusset at teh base of the thumb on each hand and then picked up just a few stitches for the thumb at the end and used the stitches from the expanded gusset.

They were quick to knit which was just as well because I ripped them out a couple of times.  I was making the pattern up on the fly, so to speak, and had to go down in stitch number twice.  They fit me snugly and I think they'll be fine for her.
Posted by Jan at 3:05 pm

They are lovely, sombre or not,and I can see the lacy pattern!! I like Moss stitch, it is kind of my favourite at the moment!!

I think long cuffs are essential - the gap is where I feel the cold the most - bottom of trousers, end of sleeves and, especially, across the back!

A useful and lovely gift.