One quickly finished object first, with no photo.  I made an Odessa hat which is on Knitty for my Queensland friend in Mallacoota, Victoria.  When she thanked me for the fingerless gloves which she'd worn all day, she almost apologetically asked if I could also do a hat.  So I've made Odessa out of some Cleckheaton Country in a lovely charcoal grey.  I put everything else aside to do this quickly, although being out a lot of yesterday cut a large chunk of knitting time.  I'll post it tomorrow, it's a public holiday in NSW today.  I took some photos but they didn't turn out very well so I've trashed them. 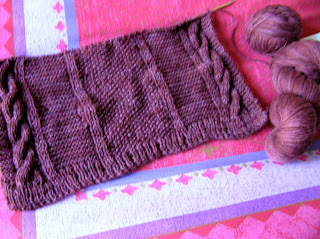 One of the other projects set aside for the weekend was the Jindabyne cowl from Lush Yarns.  (Look under kits in sidebar menu). I've been enjoying this and it knits up quickly in Aran weight.  It's 50/50 wool and alpaca.  It's better in real life than the photo where I haven't put it very straight on the bed to photograph.   Eleven button go across the end for various degrees of warmth in fastening.

This one is for me.  I'm planning a trip to Canberra shortly to see some friends and this will be both warm and stylish.  I liked all the colours in this kit but there weren't many left available by the time I had decided to actually buy some.  I really like this colour which is called garnet.
Posted by Jan at 11:49 am

You will be very warm and stylish!!!!

thatlooks lovely - I had a look at the yarn store - thanks for enabling! (lol) Natxx

The colour is gorgeous and it will be lovely and warm.