I've had a fairly blah sort of a week after the one before.  Also had some legal problems, not caused by me but by someone else.  They are still being sorted.

I took refuge in the Jindabyne cowl down a couple of posts.  It's now finished but needs buttons.  I was going to walk down to the button shop in King Street and have a look this morning but felt so out of sorts that I've postponed it.  That end of King Street is not easy to reach from  here.  I really need to walk up to the Newtown Station and then down King.  If I try and shortcut cross-country, there are only two convoluted ways through from Enmore Rd to King.  However, the cowl is finished and just as well too.  It's been pretty chilly, especially at night even here.  Photos still to come of the cowl.

Ailsa, at Knitabulous had a sale and I jumped in early to take advantage of the 20% off.  DIL brought home a parcel last night with four hanks of totally beautiful yarn. 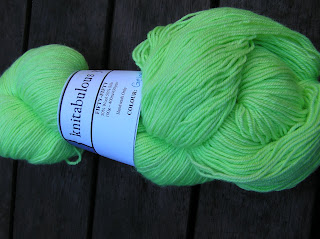 Here's the first.  This is the lovely 50/50 merino/silk.  Colour is Gelato, a very apt name in my opinion.

That's OK by me.  I haven't been adding to stash much lately at all, so I'm OK with the occasional addition to things. 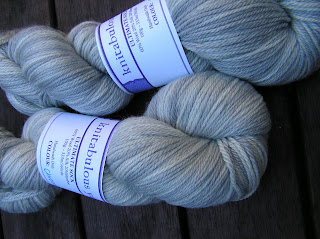 This is Ultimate Sock Yarn and it would be great for socks. It's a combination of 60%wool, 20% bamboo and 20% silk.  There were three skeins of this so I bought two.  The colour is Chrome.  With 333 metres in each skein, there will be enough for a larger shawl.  Socks would be  nice too, but I have plenty of hand knit socks for the moment and will keep this.  It's not for grandchildren as it's handwash only and I don't saddle their mothers with handwash socks.  It feels very soft indeed and I think should knit up well. 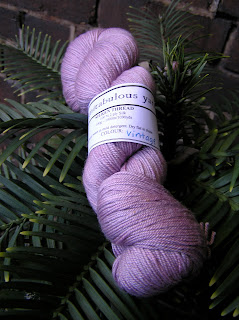 This lovely colour is called Vintage Lady.  It's very soft and delicate, mauve-ish in some lights and dusky pink in others.  It reminds me very much of a dress I had when I was a child in a colour which my grandmother always called vieux rose or "old pink".  Now the pronunciation was way off, something like "voh rose."  Bad French as well as the masculine form "vieux" should  be feminine "vieille."  Enough reminiscences.

This is more 50/50 merino and silk yarn.  Something delicate and vintage perhaps.  Again I'm not sure of the pattern I'll use but this is definitely lace.

I had trouble getting the colour right on this one.  It's perhaps a shade more subtle than my photos show. Certainly there is more pink than shown. 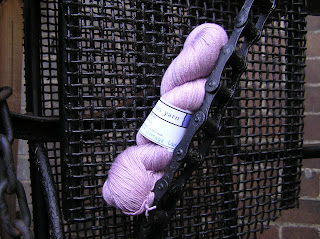 The upright photo was taken in the shade under a grevillea and the yarn is place on the top of DIL's Wollemi pine which is growing well in a large pot.

The second photo is more in the open and I rested it against our sunshine warrior made  from plough parts.  This chain  goes around him like a beauty queen's sash.

I can see quite a theme here.  I now love lace and am getting better at reading charts where I once used only written instructions.  Now I look for charts.  I've done quite a few lacy things since Bells' summer of lace and while not a beginner anymore, I still would not class myself as experienced. 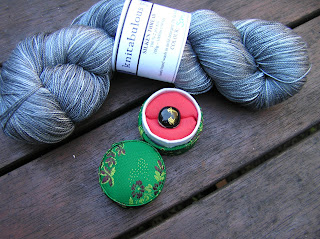 This last picture is of the skein which I drew out first from my large envelope.It's the final skein from the Japanese Yarn Club.  That's two I've done now and I've loved every colour and yarn sent.

This I think is the pièce de résistance of them all.  It's called Samurai Sword and is very definitely much more silver than my camera shows.  It's absolutely gorgeous and I love it.  It's a real finale to the other beautiful club selections by Ailsa.  Agin this is the two ply silken thread, 100%silk.  Again it's 1000 metres, so enough for a wide choice in patterns.

The lovely little container is covered in beautiful green fabric.  What you see here is a handmade glass button with Japanese characters on it.  It has a shank and is also beautiful.  Made in  Sydney by Teri at Etsy.  She's on Ravelry with the name "sthrnx" as well and at Madeit.

So thank you Ailsa for both these clubs.  I've really liked each lot of yarn and have extended my lace skills in knitting much of it.
Posted by Jan at 7:17 pm

Wow, look at all that loveliness!! I succumbed to the sale as well. The Japan colours have been beautiful, I wonder what will be next???
Hope all the horribleness is over and happiness is on the near horizon.

Beautiful yarns! The Samurai Sword--there's something about echoing a bright blue sky with a bit of clouds that is just inherently appealing.