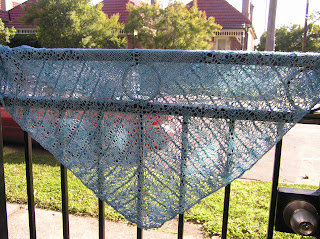 A first time for me... I blocked this about a week ago and then found the edge was too tight in the cast off.  I knit fairly loosely and have never had this happen on anything before, certainly not on the first shawl of same pattern.  I was annoyed so left it as it was for about a week.  Yesterday I took a look at it.  This is intended for a  gift, although the recipient knows nothing of this.  There was no way I could give it away with the edge tight and curling.

I took a small crochet hook and the leftover yarn.  I unpicked the  bind off on the last cast off stitch and carefully pulled out the cast off stitches, about eight at a time.  This was messy as the last actual knitting row had had knit 2 together along it and some YOs.  Using the crochet hook and the extra yarn I did a crochet cast off.  I couldn't undo many stitches in one go as I'd have dropped some.  It took me about three hours to do but the tightness is now gone.  Edges need another block, but I'm satisfied with the cast off now.
Posted by Jan at 1:08 pm

That is a true labour of love: it looks so lovely there on the railing!!

gosh Jan, that's amazing. The things we put ourselves through huh?