No knitting?  No, quite a lot of knitting, but little time or inclination for blogging.

Real life ® and sickness got in the way of finishing anything, but there are now two items finished.  One and  a half actually.  I finished the second Brangian shawl, but will undo the cast off , redo on a larger needle and reblock the cast off edge.  I thought I was doing it loosely and have never had problems before.

Legal matters upset me for a few days and I did nothing.  Then last week, there were  four of my grandchildren here for the whole week.  Four beds on lounge floor, four lots of mess, four bags, four opportunities every day for forgotten jumpers and misplaced shoes etc.  Actually, they were all very well behaved, especially as Miss 5 had never been away from both mum and dad.  There were three from one family and Miss almost 10, their cousin.  They had great fun with the world's best aunty, but boy, were they loud.  Not intentionally, just four exuberant voices together.  Said aunty and I were very tired at the end of the week and things seem very quiet now.

I was away with friends on Saturday.  Something must have  disagreed with me and I was quite ill all that night.  I'll spare you the details but will say I fainted in the bathroom early Sunday morning and hit my head hard on shower recess door.  I slept all day Sunday.  I woke every couple of hours, had a bit of water, went to bathroom and was asleep again, all in five minutes.  I did that till 7:00 pm and then slept all Sunday night as well. I think the stomach upset was cause for my body to take the opportunity to recuperate from the last three weeks.  I'm just beginning to feel better and this is Tuesday. 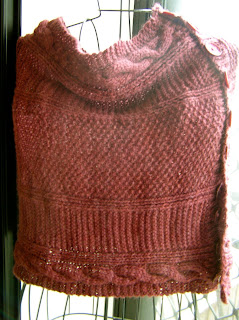 So yesterday I finished off two FOs which had been waiting my attention.  Brangian has already been mentioned.  The other is the Jindabyne Cowl from Lush Yarns. See under kits in their sidebar.

The colour here is very washed out.  It's supposed to be fine today but it looks as if it could pour any minute.  I'm pleased  with this, it's very cosy.  I'm also pleased to have it finished.  A metre of it was beginning to be tedious.

DIL's model, one of many she owns is more sylph like than I am.  It's a bit big on her but goes around my shoulders nicely and feels very snug.  My planned trip to  Canberra with friend hasn't yet happened.  Real life again interrupted both of us.  However, we'll get there and Canberra will be cold for a good while yet.


The colour is called garnet and is a beautiful mulberry shade which I really like. 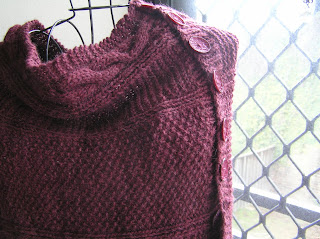 This is more like it.  The colour is much truer here.

The buttons come from All Buttons Great and Small, down the Tempe end of King Street, Newtown.  I walked down one morning when all the grandchildren were out with the world's best aunty.  It was much colder outside than I anticipated and windy.  It would be good to be able to go cross country to them, but the two ways through from this side are messy.  I walked up to Newtown and then down to the shop.  I pushed open the door and oh, it was blissfully warm inside.  Not that horrible overheating as in shopping centres, but an enveloping warmth which was lovely.  Both assistants were lovely too.  They oohed and aahed over the cowl and both searched for the perfect buttons.  I had decided that if necessary, I would even have wooden toggles, but they were determined to find something we all liked.  These are the perfect colour for the yarn and although it's difficult to see in the photo, they are textured with tiny raised dots.

When I went to sew them on yesterday, I realised that a backing was needed for stability of the knitted  fabric and security of each button.  I didn't fancy the idea of woven tape which I've seen used.  I hunted in the many packets of vintage buttons my friend gave me and found nine glass buttons a good size to use.  I then found another two, slightly different but quite usable.  I've put them on the end to stay buttoned up.  The glass buttons don't show much and give much strength to the cowl.  When I told my friend about using them he replied that he thought there were still some  more buttons from his mother at his house, so I may get even more yet.
Posted by Jan at 12:21 pm

I can see the raised dot pattern, they match the lovely cowl perfectly. I a glad you had your grandchildren to stay and that they made you feel so happy.
Don' eat anything boogelly!!!