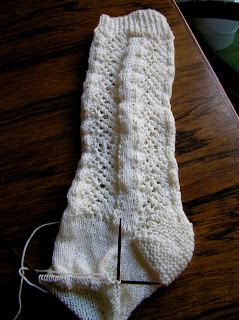 My sole project at the moment.  Pun on "sole" entirely unintended!  I'm well down the sole here on this sock which I've named "fan sock" as the pattern when material is straightened really does look like a series of vertical fans. 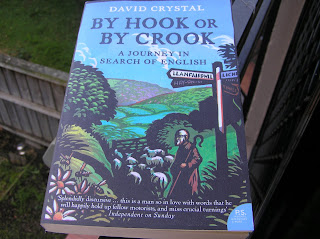 It's an eight row pattern over eleven stitches and I did twelve repeats of the pattern before the heel.  I usually carry the pattern down the instep but decided not to in this case.  I think I was influenced by a large bruise on the top of my instep at the moment, which is too sore to wear fancy socks or lace up joggers.  Even my cushion-soft Rockports are hurting it.  I have no idea how I managed to get such a large, deep, lurid bruise on the top of my foot.  It's so sore  I can't understand not knowing what I did.

The leg part is good and long.  I have plenty of yarn left, am nowhere near halfway through the ball as shown by weight left. I could have done at least another two or three repeats.  The pattern will show up much better with a bit of blocking, even wetting and smoothing out a bit will help.

I think it was at Cindy's blog that I was reading of her fascination with the English language.  I can easily understand it.  I share a fascination with words and sayings and their origins.  This stems I think from being read to a lot in my early childhood and being an early reader myself. My teacher in Grade two when I was seven or eight lent me her own copies of all the Anne of Green Gables books, the Nora of Billabong books and others  similar.  Several a week, all year.   For three of my four years of primary school I had teachers  who loved teaching, particularly English.  Lots of word derivations and origins. Lots of reading.  They also taught grammar well and I learnt a lot in primary school so that I did no new grammar in High School at all, not even things like subjunctive mood in my Latin studies.  It's interesting that after some years of little emphasis on grammar, the wheel has turned and pupils, at least here, are beginning to learn again some basic constructions.  Another benefit of reading is that one learns spelling, almost unconsciously.

It's also little wonder that I did Latin, French and German at uni and taught those subjects.  Since leaving teaching, I've picked up  koine Greek but have forgotten pretty well all the Hebrew I did in a second, later degree.

I  was reading an advertisement two days ago in a foodie magazine for a sink.  It said, "It works as good as it looks."  Aargh!  I nearly choked on my coffee.  I turned the page and the same firm was advertising an oven, using the same words.  I was so appalled that I emailed them.  No response yet.  I know it is said that any notice taken of an advertisement is good.  However, I had no recollection of the brand being advertised, just of the appalling grammar.

The book shown here was given me by my youngest son.  I think he bought it at an ABC shop.  I've enjoyed reading it.  The author journeys through Wales and other parts of Britain, serendipitously picking up lovely phrases and words and tracing their origins.  It rambles in parts and could do with some tighter editing, but it's interesting to me.  It's the sort of book which can be picked up and opened almost anywhere in the book with interesting discoveries to be made.

Thanks for the comments on my new blog address.  I really wanted something like "rites of passage,"  but any way I twisted that phrase was already taken so I tried turning it around.  It is said that many get a new hairstyle after ending a relationship.  There's not much I can do with my hair as it's short and very curly.  The curliness makes most hairstyles merge into the one style.  However,  divorce was also more than ending a relationship.  Having left him 30 months ago, I was still surprised at the way I felt when I held the final bit of paper in my hand.  Single again, but different to all those years ago.  So I'm looking at ways of marking this change.  When the house is sold and I have more disposable income, some of that income will go on something substantial to mark the change.  I'm not happy to have things end like this, but am happy to have emerged from something damaging to me.  I should have been more courageous a long time ago.  So "passages of life" it is.
Posted by Jan at 9:34 am

Your sock is lovely the bruise is not. Yes it was me going on about The English Language, I've looked out that book now.
Better a new blog address than a too short hairdo I say!!!

gosh that sock pattern is lovely and I totally agree with leaving the pattern off the foot. I think I will from now on. I mean, it looks great but mostly it just makes it harder to wear most patterns inside shoes.

David Crystal is a wonderful writer. He's written lots of books, so if yo enjoyed this one maybe you could look for more.

Thanks for the reminder about David Crystal, and for the pointer to what looks like a fascinating book. Socks are pretty too.

Belatedly remarking on the new domain name - I think it's a great symbol of where you are. Congratulations on this little investment in your future.