just off the needles 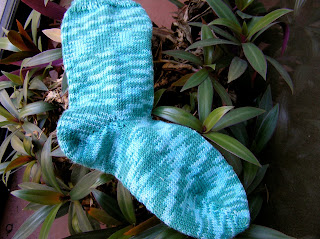 Just off the needles, toe grafted.  This is one lot of the Fibranatura wool which I bought last week  from Granny Square, in King  Street Newtown, the old Champion Textiles shop.

It was an easy knit, all stocking stitch apart from an extended bit of ribbing on the cuff.  I still had about 15 gm left to be halfway down the wool which came in a hank of 130 gm.  The leg is quite long, well over 9" and the foot fits well.  It was pleasant to knit with and has made a solid, warm sock, ready to be new next winter.  It had knit very evenly too.

I'm not 100% satisfied with the striping but I love the colours.  At the toe and the beginning of the leg just under the ribbing,  large diagonal stripes can be seen.  Not quite pooling, but on the way.  The part in the middle is lots of very busy, narrow, horizontal strips.  Now that must be the way it was dyed as I did nothing different there.  I'm expecting a reversal of this order on the second sock which I began this morning with my morning coffee.

I started the sock, planning to do Ailsa's Mountainfold pattern which is easy, effective and quick.  I was about through the 40 or so rows in the leg pattern when I realised it would look better plain.  The colour changes just did not work with the pattern which I first did in a solid colour.  I ripped it back to the cuff and just went round and round and round from there!

I can't say I'm surprised at the election results.  It was a lacklustre, uninteresting campaign which seemed to me to be basically one side taking potshots at the other and then the reverse. Very little showing of initiative and lots  of being short on facts.  Don't blame me, I should have lived in Tasmania!  While hung parliaments are not usual at the federal level in Australia, they do happen in the states and are not uncommon overseas.  I hope both major parties can take the lesson from the slap from the polls.  Hope but doubt, actually.  Having only two entrenched major groups is really part of the problem.  Both the  electorate I live in now and my previous one are safe Labor areas.  Very safe, even with a swing against Labor.
Posted by Jan at 9:24 am

The colours are beautiful, and it looks nice being plain knitting. The gusset always plays merry hell with any kind of striping!!
Yes, good old Tasmania, we like to get there first, to smooth out all the bumps for the mainland!!