so, do I need more sock wool? 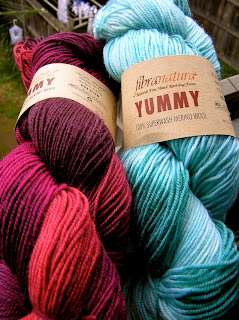 I was out and about in Enmore this morning so decided I'd go back down to the new shop, Granny Square, where Champion Textiles used to be.  I was there Monday, the only day of the week that they are shut.

It's certainly different.  I was talking to Ruth there and mentioned the dust and grime from before.  She told me they took three large skips of rubbish from the place and they are still working on parts of it.  Their time and effort shows.  It's bright and airy and clean.  She also said that they found a mummified cat between two of the very old brick walls.  I found this both horrifying and fascinating.  On my way home I remembered that some very old places down near Woolloomooloo had had similar items found and shoes had been found in many chimneys.     All part of builders' superstitions of the eighteenth and nineteenth centuries in Sydney.

So do I need more sock wool?  Few sock knitters would say no to that question.  As you can see, this is Yummy sockwool and very yummy it looks too.  There are 130 gm in the skein, plenty for a large pair or perhaps knee high socks.  The colours looked like a gelato bar or perhaps a bag of boiled lollies.  I could easily have bought at least another six colours.  They all appealed.  Other brands were available too.  370 yards/340 metres approximately in each hank.  It feels very pleasant too.  I was also taken with the Morris and Sons bamboo/merino mix which was ultra soft.

Yes the trains are close here.  This is an old are of Sydney and used to have a chocolate factory here.  It burnt dow and eventually some units and these town houses were built on the site.  We are close to the trainline.  Inter-urban trains run in both directions on the side closest to this place, then outer Sydney trains and then the inner city lines are furthest from me. 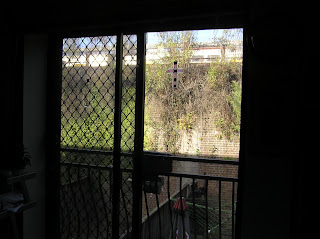 This photo shows what is both the window and doorway in my room.  As you can see, the trains are close, about ten metres away on top of the brick wall which was built in the nineteenth century.  Trains first ran past here  about 1850. 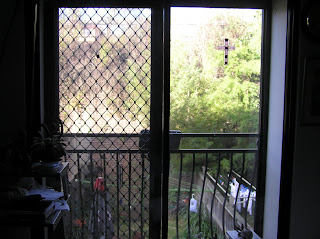 There are doors here with a gap of about half a metre between.  The outer door also opens on to what could be used as  a place for plants. There's a screen door on that one.  The system works really well.  The three floors above ground all have a similar system, although those at the front have a much wider gap making a couple of small sunrooms.

It works really well as a sound barrier and is great insulation too.  My room is the coldest part of the house, apart from the below ground bit.  I have not yet used a heater in here, although it's been close a couple of times.  We haven't had any form of heating used in the rest of the house either, all winter.  Only the boarder here watches TV so we rarely sit in the lounge  area.  It's quite warm there.The sun comes in from the front through the small sunroom and into the house.  The office on the third floor gets the sun through the glass most of the day and is very warm with warm air rising through the house.  In summer, we shut the blinds and open the door to the below ground area.  A lovely cool breeze blows through the whole house all day then.  If the weather is not too hot, we keep the doors shown open as well.  The area gets a breeze which I think comes from the harbour. We're not far away, as the crow flies.
Posted by Jan at 3:05 pm

One can never have too much sock wool!! It is such a small outlay for hours of fun and enjoyment and then wearing!!
I think your doors are an excellent idea and the house must be very energy efficient.

I agree never too much sock wool.
Thanks for your comments on the Aviator Hat, I actually made two , but forgot to take pics of my second baby package I sent off this month. Yes a quick knit and practical too.

PS: no not that building :)