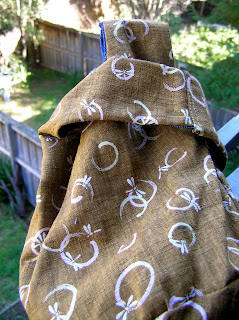 Witty Knitter and I won a prize each for comments on Fee's blog.  Fee emailed me on Friday to say she had posted it, and I picked it out of the post office box, early today, Monday.  That was super quick, even though we are not far away from each other as the crow flies.  That doesn't always mean much as I found when I used an Express Post envelope to post something urgent to a friend a couple of years ago.  I could have walked to his place in about an hour.  The envelope, express and all, took eight days to get there.  The only recompense offered by Australia Post was another express envelope.  And they wondered why I was sarcastic.

Look at this lovely project bag, perfect for any number of things.  It's lined  with deep blue, is well made and sturdy, something much needed for carting small projects around.  I love it.  Thank you so much Fee, it will be much used by me.  There was another surprise, totally unexpected. 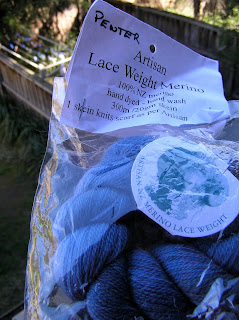 Inside was this skein of Artisan laceweight in a gorgeous soft grey, called pewter.  It's NZ merino and there are 300 metres in the hank.  It's hand dyed, hand wash, 20 gm in the skein.  It's beautiful to look at and to touch.  As I said in my email to Fee, I once shied off lace.  Now I feel lost without something lacy on the needles. So thanks for this too.

I went out to empty the PO box this morning and then caught the bus back to Broadway shops.  Did  a few things there and then decided to come home  for lunch.

I caught the bus back down the highway and decided  to go to the new shop, Granny Square as it was on the way.  I just ran out of time to do that on Friday.  Hopped off, crossed the road and was admiring the window display in the old Champion Textiles premises.  Then I realised  I could see no one in the shop.  Looked at opening hours and they are closed Mondays, so I'll make another trip sometime when I know they are open.

Now to purchases.  I've been admiring lots of asymmetrical jackets etc lately.  Then I decided to make one.  This will be to something I have thought of myself, but I need to finish tweaking the pattern to double check my numbers.  Top down, no seams.  It's a deep, tweedy green which I rather like.  It too was in the PO box this morning.

It will be asymmetrical and will probably have an extended shoulder line but no real sleeves.  Some big buttons, perhaps wooden.  Garter stitch edging and I'm contemplating perhaps a cable  or something for a bit of relief from  acres of stocking stitch.  I'll consider that again probably.  Then I need a swatch.  Hopefully it will still be useful in spring. 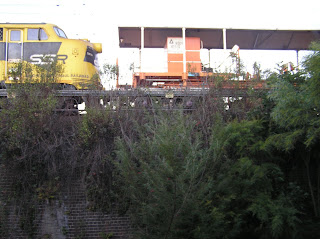 It was very spring like in the Southern Highlands on Saturday.  Clear and crisp and there had been an early frost.  My friend and I would have liked to drive around sight seeing but we came home earlier than we often do.  One of the reasons I felt bad was a very poor sleep Friday night.  There was trackwork on this train  line.  About 3:00 am I was woken by the sharp yapping of the Jack Russell pup next  door.  She's tiny and even her barks sound like yaps.  She was yapping at these two huge engines which had pulled up, about 10 metres from my bedroom window.  She yapped about an hour and kept me awake even though the engines had been turned off and no workmen were around.  I took these photos in the morning and there were still no workmen but I dressed in the bathroom as I wasn't comfortable in my room. 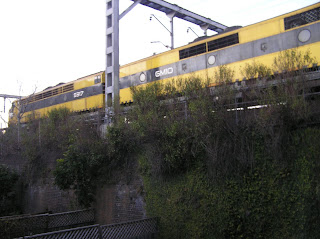 Attached to the two engines were many carriages like this one, two more diesel engines and probably about forty large trucks carrying ballast for the train line.  The length of the train stretched almost to Stanmore station which is ten minutes walk from here.  The train moved late Saturday night, but fortunately the dogs next door were inside when it went.

Oh it seems very strange to have a train outside your window!! I hate interrupted sleep, I seem to sleep badly lately.
Beautiful prize, and I can't imagine you ever shied away from lace!!
Green Tweed, mmmmmmm!!