the good news and the bad

It's been a strange week.  Again, not a lot of knitting this week.  This time I have a reason.  The arthritis in my hands has been bad and my thumb is still quite swollen.  I've done just enough knitting to give the fingers some exercise but have had to stop before the pain was aggravated.  It's also been bad again in my feet and under the instep is quite swollen.

We've had another break in here, but this one has been very peculiar.  This townhouse is the seventh in a group of nine.  It has three floors above ground and a very large garage underneath which has internal access from  the house, down nearly twenty steps.  Like the townhouses, the garages are in a row, well underground, accessible only from the house or through a main heavy security door which is operated only by a remote control.  That door has not been tampered with in any way at all.  The dogs next door which sleep in their garage did not bark as they were still outside on that night.  They bark at any disturbance.

However, last Wednesday, the temporary boarder here came up saying the garage had been entered.  The walls of each garage are concrete block but the door is perforated and can be seen through with a bit of peering.  Ours is used as storage. A lot of my stuff is there in boxes.  DIL has craft stuff and said boarder has a small area where he watches TV on a fairly new, enormous flat screen TV which can't be seen from the doorway.

We went down to find the perforated metal had been cut with a knife or tinsnips around the handle and on each side where it was bolted.  Stuff was on the floor but very little had been taken.  There was opportunity to take tools, electrical goods, the TV etc.  All that seems to have gone was food!  There are two small fridges down there, one belonging to the boarder.  It had bread in the freezer, and three plastic packs of frozen wontons which he makes into soup for himself with powdered stock.  Not my sort of stuff at all. The bread has gone, the wontons are gone and apparently a couple of bottles of wine. Nothng else.  Very, very odd.

DIL and I have a theory but son tells us not to speculate.  Last Monday evening was wet here.  The young guys house sharing the place next door wanted to BBQ.  So they took the BBQ to the garage and totally filled our place with smoke.  Boarder and I were the only people at home and he told them BBQs were for backyards.  I'm quite sure he used much stronger words than that.  He has an abrasive personality and I hope he moves out soon.  Son's doing him a favour till he gets a settled job.  Our guess is that the guys were probably fairly well primed with alcohol and didn't take kindly to Andrew's suggestion.  We think it was a form of retaliation.  Nothing else has been touched, nor any other garage in the main area.  Very, very odd.  If someone was desperate for food they would have taken things they could have pawned  for money to buy food.  Loads of local pawn shops here.  We've had to repair door and beef up the locks.

The good news?  Spring definitely is here now and today is beautiful.

More good news?  I attended a lovely wedding on Saturday of two young people who've both had a bit of a rough time in life. It was a beautiful wedding in a beautiful church.  I cried.  My friend gave the address.  He's a chaplain for St John ambulance and the bride and groom met in a St John Division.  He had been in Vanuatu on business for a week and we had a great time catching up, being very happy to see each other again.

And more good news... My phone is a Nokia.  I've always had them before and been satisfied.  This one has not been as good, more difficult to use etc. It's also falling apart even though I treat it gently.  It needs an elastic band around it to keep it together, despite repairs.I have six weeks left on contract and have been looking around for a replacement. 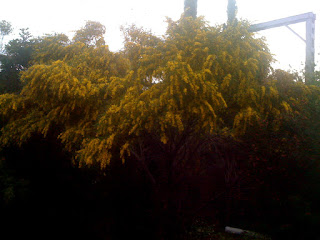 Son wangled himself a new Apple iPhone 4.  His wife and I don't know what strings he pulled or favours he called in.  They are as scarce as hen's teeth in Sydney with every shop having a very long waiting list, and supply being very short.  His cost him nothing as  a VIP with current carrier who gave him an incentive to continue with them.  He gave me his old phone, iPhone 3G.  I don't really need all its features, I have always chosen a fairly basic phone in the past, but who looks a gift horse in the mouth?  So I've spent most of the last day just exploring the possibilities of the phone.  When my contract ends I'll hook up with an even better deal than the one I have now and still pay the same as I do now, which is quite reasonable.  The photo was taken with the phone as an experiment.  Certainly downloading photos to the computer is very easy and the fact that they are both Apple products is useful in compatibility too.

That is indeed very puzzling and I think your theory sounds very plausible.
Hope your arthritis calms down soon. I know that Harki's arthritis was worse in Spring, the vet said it was because the air pressure was going up and down a lot. May not have any relevance to you at all!!
Spring has come here, it is going to be 19* today!!
Weddings are lovely, I am glad it was a good one!
Hurray for a new phone, I hope you can explore all its features!!

Have you ever tried Apple Cider Vinegar and Honey for your arthritis.
My Mum swears by it since she had started to have trouble with previously badly broken arm about 30 years ago. She is 81 now and pretty much arthritis free. She uses Double Strength Apple cider vinegar & Leatherwood honey. Teaspoon of honey
and tablespoon of vinegar dissolved in hot water every morning. The dogs even get a splash of vinegar on there dinner. Drop me a line if you want to know more. I need to take my advice as have arthritis starting in my hips.