What a weekend!  It was wild and wet, not as wet as in Victoria or South Australia, but very wet all the same.  It was windy, blowing a gale.  It was freezing.  We missed out on the earthquake New Zealand had, but our weather was  wild as well.

It was a good weekend, nevertheless, but required some adapting of plans.  No picnics, no leisurely strolls around Southern Highland villages, no sitting in the sun outside at small cafés.  But there was conversation, food, fires, friends.  The friend who I always go with and I sat in my motel room at night drinking hot chocolate made from chocolate on a stick from Adora chocolates which is near both our places.  The chocolate had a goodly slosh of butterscotch schnapps lacing it and was just right for the time and the weather.  The drink was accompanied by pieces of good dark chocolate covered dates, or ginger or pieces flavoured with wattle seed or caramel.  We had both bought a selection from Adora, unknown to the other.  The whole weekend was freezing and the hot drink was very suitable.

The weather became wetter the further we drove from Sydney on the Friday.  Saturday was bitingly cold, so foggy we could not see over the road all day and  the fog was accompanied by torrential rain.  Sunday was just as cold but fine and sunny.  It felt even colder because the wind blew over 100 kmh most of the day.  A real gale which brought down trees and caused blackouts.

I took a sock to knit and did do some occasionally.  The first sock, my wool and the second on dpns all fitted well in the small bag I won from Missy Fee.  It sat on my wrist and so the yarn was contained.  The bag was a great idea and I thank Fee again for it. 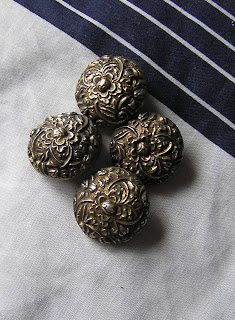 When we arrived here on Sunday afternoon it felt like the sub-tropics.  It was very much warmer than further south.  My daughter-in-law had not long arrived  from a month in Sri Lanka.  A small gift, easily accessible  from her carry on luggage was handed over.  These buttons which came from  what we would consider an antique shop were first.  They are not quite as bronze as the photo shows, more a silvery bronze.  I intend putting them on my Rustic asymmetrical vest when it's finally finished.  I think they'll be just right on the chunky, dark green wool.  They are metal and almost two centimetres across, with a shank at the  back.

I think they will probably need a backing of another small button on the wrong side, but I'll consider that some more when I get tot sewing them on.

Now I just have to get the knitting done and blocked.  No seams, I'm working on it top down and making notes as I  go of what I have done. 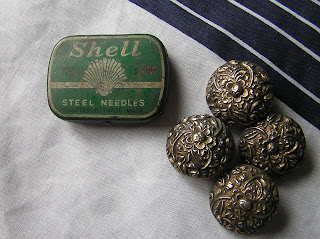 With the buttons  was this small tin.  I immediately knew what was in it.  She didn't but had thought it looked interesting and that I would like it. DIL thought the word "needles" meant sewing needles. I showed my friend the tin and as I had guessed, he also knew what would be inside.  She was surprised at our reaction as she had no idea herself and hadn't opened the tin.

As a child, I used to listen to very old recordings from my Grandmother.  Marches, comedy, single pressings from Nellie Melba, operas and operettas.

They were all played on an  upright windup gramophone similar in design to the one in the link.  If you click on picture in link it will enlarge and running mouse over picture will show details.  Grandma's gramophone was beautiful polished rosewood about forty years older than the one in the link and it now stands in my brother's large hallway. 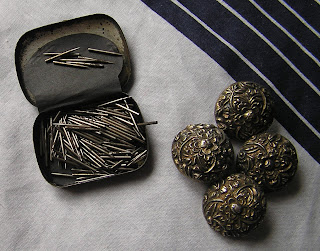 The tin contained gramophone needles for  such an instrument.  Some were marked "extra loud."  Perhaps they gouged more of a track in the old 78 records than those producing softer sounds, made many years  before vinyl records appeared .  Something out of the ark to young people now.  I have three or four wooden butter boxes full of these old 78s.  I think that when I finally move to my own place I will donate them to the National Library  Sound and Film archive in Canberra.  I have friend working there who is interested in them and I can have them put on CDs.

I like links to the past like these, just as I like the sense of history which comes from  continuing and activity of knitting which is hundreds of years old.  Knitting patterns like the old Shetland patterns is another link which I enjoy.

I'm glad the weekend was still enjoyable, in spite of the weather. Isn't it always the way that the weather is fine before and after you want it to be?
They are lovely buttons and I do remember needles for the record player. We had some 78s when I was little- Bing Crosby and maybe something Irish too.