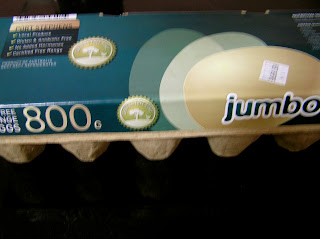 Two days ago, I was off to make aioli or garlicky mayonnaise.  Mayonnaise, not the gloppy stuff in jars by names like Kr*ft.  The real deal.  I buy the expensive egg mayonnaise, but really there's nothing like the proper stuff.  Once made, it's easy the next time around.  I rarely make it because I could easily use far too much of it,  it's so good.  It bears no resemblance to the supermarket mayonnaise except for having the same name.

Aioli which came from Provence in France,  is made the same way but with the addition of garlic.  These photos are not wonderful.  The battery was getting low on the camera and the warning sign was actually flashing halfway through the making of the mayonnaise.  So the photo quality is well down.

First off, the recipe.  Lots are around on the net, even on Australian sites.  Basically, true mayonnaise is an emulsion, not a mix, of two unlike liquids, oil and beaten egg yolk.  Seasonings are really an aside.  It can be as simply seasoned as adding a pinch of salt, or ground up herbs or garlic as aioli is.

Start with the eggs.  The recipe I had used two egg yolks. Separate the eggs carefully.  Use the yolks  and put the whites aside.  They can go in scrambled eggs or an omelette or even meringue.  DIL is very keen on using organic or free range produce and that includes eggs.  These cost a bit more but they were very fresh.  The raw white was very solid around the yolk.  These came in an online order from Woolies.  The first time we used this brand, about a year ago, every egg in the dozen pack was a double yolk.  We found that pretty amazing.  No double yolks yet from this dozen, but the colour of the yolk is intense. 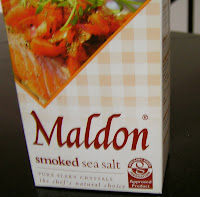 Garlic has been finely chopped and added and now for the salt.  Some recipes say two teaspoons, others just the one.

I put in one teaspoon of this smoked salt.  I could have used a bit more as the smoked Maldon has  a fairly delicate flavour.  We save it for special times  and use other Maldon varieties and other brands too.

Pepper as well, a fairly spicy blend from 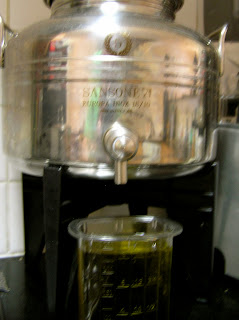 Having done my name dropping for this entry, LOL, on with the recipe.  Do you like DIL's oil container?  It was given her by a chef friend of hers.  It holds four litres and protects the oil from the light and from the air.  This oil is beautiful, from a small farm near Parkes in the central west.  Son has bought oil from them before.  The olives for this oil were picked in May and this is extra virgin oil, from the first light pressing.  It has a lovely greenish tinge and a wonderful fresh flavour.  Son often brings home fresh crusty bread from a bakery near where he works and will have a couple of pieces lightly dipped in the oil before dinner.

The recipe called for 250 ml of oil.  That may seem a lot to mix with two yolks but it will work.

Here's where it gets a bit tricky.  The egg yolks etc are lightly beaten and the oil added.  But as the oil is a different type of liquid to the egg mix, the two will never blend if it's all tipped in at once.  With the mixer running all the time, very, very slowly add the oil a drop at a time and continue mixing.  Use a couple of tablespoons of the 250ml in this way, super slowly.

The mix will thicken and continue to thicken as the two combine.Mine is not as well mixed as I would like it to be and is still a bit runny.  My Magimix food processor is packed in my things but the measure for the lid has a very small hole on one edge to allow the oil to drip slowly through.  DIL's Magimix is a newer model than mine and doesn't have that feature.  I think I've done it a bit too quickly this time.

When all is done, some fresh lemon juice is good in it.  It's wonderful on practically anything but is very rich.
Posted by Jan at 6:00 am

YUM! I think I will be making this one! Thanks for the recipe :)

one of my favourite things to do! I've failed the last couple of times - I think I get sloppy in my approach. Thanks for your excellent run down!

we haven't mastered the art of homemade mayo yet but would really like to. We also buy our oil from an olive farm in 4 Litre tins, the flavour is like no other olive oil i have ever tried.

Fellow blogtoberfest participant here and a frist timer to your blog. Hoping to get around to all blogs. Would love you to visit mine - I have just put up a giveaway post http://missnance.blogspot.com/