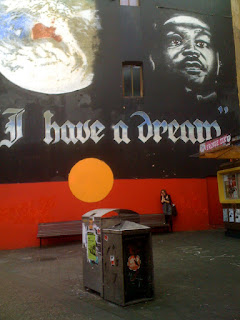 October  8th today, almost a third of  the way through the month. I won't say much more about the date.  Cindy took fright when I mentioned that October must mean almost Christmas and this month is well on the way. LOL

I walked up to Newtown today to get bread to take out tomorrow.  I was wondering what to write about for Blogtoberfest today.

I walked down King Street which is like a little world in itself, although the council has cleaned up a good deal of it in the last few years.  There are all types.  The fellow outside Newtown Mission which serves free lunches several times a week.  He had long dreadlocks, almost to his ankles, coloured in different rainbow colours.  Then there are the young girls in skirts which cover no more than they should as my mother would have said.  Skimpy tops and a feathers scarf.  Lots of dogs and their owners.  Students, very old people, some street people who sleep on the streets.  Gone is the man who used to lie outside the hardware shop with his fly undone and everything exposed.  No one seems to know anything about him.

Newtown is a very political place, much of it extremely leftwing.  The Greens are conservatives when compared to some of the posters I see. 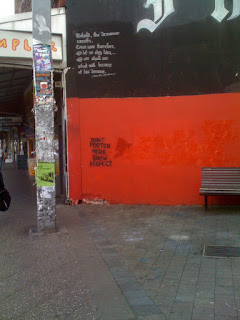 This mural has been there for years and years.  The photo is not wonderful, being taken on my phone and hard to focus properly.  There's a sign asking that it be respected and no posters be placed on it.  That's fairly well respected.

The little bit of writing in the bottom left corner is hard to read.  It refers to the story of Joseph, of the coat of many colours fame.  Joseph was a dreamer.  His dreams told of his supremacy over his brothers who hated him and tried to dispose of him because of the dreams.  The writing says in a modern translation,Here comes this dreamer.  Come now let us kill him and throw him into one of the pits; we shall say a wild animal has devoured him and we shall see what becomes of his dreams.  (Genesis 37:19-20)
Posted by Jan at 3:24 pm

I love King Street - always something to look at.

That particular mural has been there (although in a previous form) since before I was at uni (cough20cough years ago). Some idiot/s defaced it with graffiti at some point and that was covered with the Aboriginal flag, as I recall it. Nice to see it's been (reasonably) well respected since!

I couldn't think of a time frame when I wrote the blog. DIL informed me at dinner that it was twenty years as she'd just read an article on it. Painted basically in the dark with the loan of a cherry picker on the night as the sheer size was overwhelming. Finished at 5:30 in the morning, just before dawn.

I also like teh one which used to be visible from the trainline at Macdonaldtown of the three Olympic athletes on the podium at Melbourne Olympics 1956. Painted on the back of a house. That was threatened by a planned tunnel under the line but the whole street seems to have now had a reprieve.

Street art abounds around here, much of it fairly political and then there is the graffiti as well. Nowhere near as interesting in its background and usually nothing more than vandalism. A few years ago, Macdonaldtown station was painted at night. It was an ugly station and overnight became lollipop pink.

I am shocked that the year has passed so quickly, but in comparison to 20 years, it is but a blink of an eye!!

Wow, that is pretty profound verse.

I love the mural. It's beautiful.