the long and the short of it 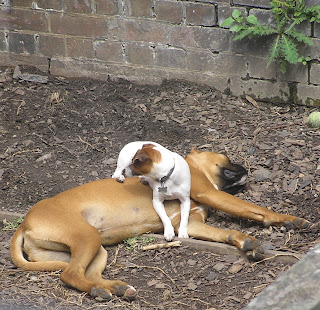 Two dogs lie in a moonscape of their own making.

I took this from the first floor, through two glass doors, so  it's turned out surprisingly well.  Full zoom.  I didn't even clean the glass so I'm quite pleased with the results.  If I even click one of the two locks, they wake up and bark at me.

I feel sorry for them.  The terrier was first on the scene and was bored stiff so a second dog was obtained.  He's a lovely fellow, but far, far too big for the tiny yard.  He is taken for walks but the couple work late many nights so the walks are at the weekend.  They have toys, new toys often but they break them quickly.

He's across the board which originally marked a garden edge.  All the boards but this one have been pulled out and chewed into pieces.  Where the tennis ball is, there used to be a magnolia almost two metres high.  He jumped up and held bits down, while Sascha the terrier pulled at them  Result?  Magnolia all gone.  She was jumping at some ivy on the wall the other day but couldn't quite reach it.  Baxter stood on his hind legs and pulled it down.  He ran around for a while munching at one end, while Sascha raced after him, grabbing at the trailing pieces.  She eventually pulled it out of his mouth and ate it all up, thick stalk and all.  Must have wanted salad.

She started climbing on top of him when the weather was cold.  She's only small and her coat is very short.  Sometimes she has her head under his tail, sometimes in his crotch.  This morning she was down his back with her head under his tail.  Baxter started barking at a bird, reasonably gently.  Every bark he made, she was raised off his back and let down again.  She slept.

Even funnier.  He was gnawing a bone last week.  He paid a lot of attention to the bone.  She was actually humping his hind leg while he contentedly went on chewing the bone.

We feel really sorry for them both.  They bark from boredom.  The whole yard looks the same as the picture, they've worn away the grass and ripped the plants out. They are lovely dogs really but annoy us with their barking.  Since it's a bit warmer they have been out at night and even without my hearing aids I can hear them when I'm trying to sleep.

I've done some more on the Noir sockyarn scarf/shawl.  I like the colours but there's nothing exciting to see yet.
Posted by Jan at 1:26 pm

Oh that is sad... not really the right sort of dog for that space at all. Perhaps a dog walker would help them?