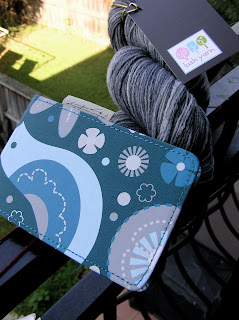 The first instalment of the Lush luxury yarn club has finally arrived.  It's a skein of cashmerino, 110 gm with 400 metres/100 gm.  80% merino and 20% cashmere.  The remaining two instalments are one of silk cashmere mix and, I think, a pure cashmere skein.

This is a pretty blend of greys and feels very soft.  There is a sturdy notebook as well, covered in canvas.  I've taken to carrying a small Moleskine notebook in my bag, so I now have a replacement for when that is full.  I am not a note type person.  I rarely make lists and don't (usually) forget things.  However in this time of change I've been jotting down ideas as I see inspiration and also notes on styles and suppliers of furniture, decorating ideas and so on.

There were a couple of other things too, wrapped in paper, but they have, ahem... disappeared.  I ate them.  I've had no chocolate in my room for a couple of weeks, so those other offerings went quickly.

Now to add a picture.  I see Blogger has an update on their image software due but I have no idea of the time difference between here and wherever they are.  So we'll see.  OK, so it was slow, but it loaded.
Posted by Jan at 9:14 am

Very pretty greys and a good book. I think the chocolate must have been good!!
I am always forgetting things if I don't write them down.